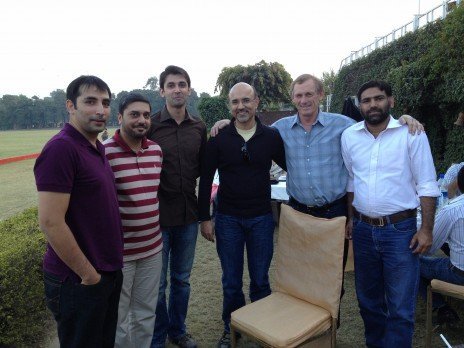 I will remember 2013 as a year of great struggles, both professional and personal. But it looks like both FINCA and the family — if indeed there is any separation between these two — are ending the year on the upswing. There is always the temptation to heed that little whispering in the ear “It can’t last”, but for once I’m just going to enjoy where we are right now.

No small amount of satisfaction is derived from my recent trip to Lahore, Pakistan, for the rebranding launch of FINCA Microfinance Bank, Ltd., a fantastic event marked by a sell out crowd of 350 dignitaries, staff, media and artists, as well as great food and even some great (and blessedly brief) speeches. Afterwards, one of the dignitaries commented to me about our delegation from FINCA HQ: “So many foreign businessmen seem like they just want to do their business and get of the country as quickly as possible. But you FINCA people seem to really enjoy the great things Pakistan has to offer.”

Got that right. New countries — I’ve only made four trips to Pakistan, so it still qualifies as “new” — always pleasantly surprise me, in large part because their charms are largely lost behind the sensationalist headlines that typically capture only the bad things that occur there, which of course are no more representative of the land and the people than the acts of senseless violence that occur in our country.

There are new prospects on the World Peace front, as well, aren’t there? We could choose to heed that soft voice in the ear: “It can’t last”. But let’s not. Let’s give it a chance. And who knows? Maybe this time it will last, and a Better World is just around that Bend in the River.