Will the Bank of the Future Put ‘Integrity Over Profit’? 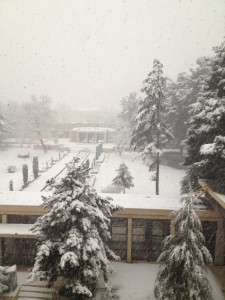 Awoke to a beautiful snowfall here in Kabul. Going to be an interesting day meeting with my team.

An article in the Financial Times on Thursday quoted the CEO of United Bank of Switzerland (UBS) as saying, referring to the past performance of the bank: “We all probably got too arrogant. I think the industry has to change.”
The head line of the article was even more arresting: “UBS Chief vows to put integrity over Profit”
Come again? Is there really a systemic change taking over the banking sector, where ethics will trump profits, and the customer’s needs will take precedent over those of the shareholders?
Cynics would be forgiven. UBS lost $38 billion in derivatives (gambling with depositors’ money) in 2008. A rogue trader took them down to the tune of $2.3 billion last year. Compared to that, the Fed’s fine of $780 million for aiding and abetting clients’ tax evasion was chimp (no misspelling, like it better) change. Finally, regulators are still working out the final tab for a Libor rigging scandal.

Whew. That’s a lot of arrogance. Maybe any change of strategy would result in an improvement in the bottom line. Still, one can hope. And if Andrea Orcel’s words translate into actions, this could be a further gravitation on the spectrum away from Business as Usual towards the day when every business is a Social Business.

Speaking of hope, there is actually a fair amount of that these days here in Kabul. The moderate Taliban is said to want to come to the table. Talk of peace is in the air again.

Based on my experience in Central America of the 80s and 90s, the real move toward peace will come when and if the global underwriters of the war cease stop financing it. In the case of Central America, Castro’s financing of the conflict ended when he was cut off by the Soviet Union after the Wall fell. Soon after, the U.S. ended its military aid to the Salvadoran government. The belligerent parties soon came together, and today former combatants on both sides share power in a government whose biggest problem these days are fighting gangs and drug lords.

When a country is in the midst of a shooting war, peace seems unattainable. But the truth is, wars cost money. And the day the sponsors of wars stop writing checks for it, the guns fall silent.