Why I voted against my self interest — and won! (I think) 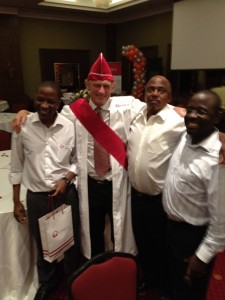 My Uganda Mates Confer Upon me Unique Celebratory Threads

Did you hear that sound? It was the Fat Lady Singing.

Republicans around the nations are asking why, how could this happen? More important, they are asking how to avoid defeat in future elections.

When I was a consultant, I learned the huge importance of getting the diagnosis right before making any recommendations. If you conclude your patient is suffering from malaria, and he really has typhoid, you aren’t going to prescribe the right remedy.

In this sense, the post mortems coming from the Republican side — whether they be from Deranged Talked Radio or the Establishment Gurus — are good news for the Democrats. They suggest the Republicans could wander in the Electoral Wilderness for decades to come.

The Talk Radio crowd have concluded that Romney’s big mistake was that he ‘wasn’t conservative enough’. That is, he should have thrown away the etch-a-sketch and stuck to his hardline right wing positions taken to win the GOP Primaries. They are mad as hornets at the Republican Establishment for turning their guy into a moderate wimp. This is ideology mascarading as diagnosis. Wrong diagnosis, wrong solution.

Oh, but don’t think Rush and Hannity are stupid. Far from it. Like Obama, they won big in this election. They will make millions stirring up hatred against their straw man ‘liberals’ over the next four years.

The Republican Establishment view is — as so clearly articulated by Romney in his private moment, captured on a mobile phone — is that Obama won because he appealed to the 47% of the population who don’t pay taxes and expect to be permanently subsidized by the 53% who do. This is a no less fatal misread of what really happened on November 6th. First of all, I’m willing to bet that many of the 47%, whipped into a froth of rage by Talk Radio, voted for Romney. But more important, people who don’t earn enough to pay taxes don’t aspire to a future of continued low income jobs plus ‘government handouts’. They want good jobs, for themselves and their children. And they want to climb the same ladders to the goodlife that Romney’s kids enjoyed. Obama said he would help them. Romney promised to burn the bottom rungs off that ladder.

Cue up the next act. Can Obama and Boehner work together to keep us from going over the Fiscal Cliff?