Where is “Brownie” When We Need Him? 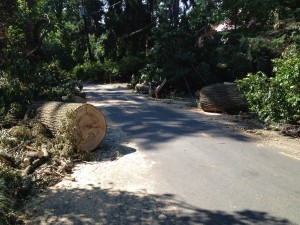 I know that, where past Presidents are concerned, we’re supposed to let the past stay buried, but as Day Five dawned, hot and steamy, with no end to our ordeal in sight, I couldn’t help but recall that infamous moment when our Commander-in-Chief alighted from his helicopter in New Orleans after Hurricane Katrina. His go-to-guy, “Brownie”, was on hand to greet him. “You’re doin’ a heck of a job, Brownie!” Bush quipped, surveying the devastation and clapping him on the shoulder.

Until now, I had thought that W’s aptitude for identifying and recruiting incompetence knew no equal in Modern Times. But had I an energy utility executive within reach of me now, I would clap him on the shoulder and bestow a similar encomium on him. “You’re doin’ a heck of a job, PEPCO!”

In fact, like the people of New Orleans in 2005, I think the time has come for all of We, The Powerless, here in Bethesdalandia, to begin to pursue alternate strategies to waiting to be rescued.

In my own case, I have decided to learn to repair my own powerlines — without getting electrocuted, hopefully. I have looked into this, and I can become a Licensed Electrician in only 9 months! This is probably only half the time it will take PEPCO to re-connect me to the grid. In those nine months, at a cost of only $789, I will become conversant with the following technical areas:

Just get me a caisson of high tension wire and hook me up! Come on, what are we waiting for!