Where are the Leaders? Here is One 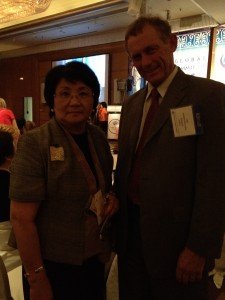 Most of the time you mention the small, landlocked Central Asian country of Kyrgyzstan people say “Oh, you mean Kazakhstan”, which, thanks to Borat, they recognize. But Kyrgyzstan is different from most of its Central Asian neighbors in many ways, and most of all because it is a true democracy, thanks in great part to the leadership provided by its former President, Roza Otunbayeva, during the difficult political transition of 2010. Naming Roza Interim President was one of the few things the warring factions agreed upon, and unlike many who have assumed that mantle, Roza made it clear that she was going to step down once transparent elections were held (and for which she was not a candidate, a point she also made clear), and she was as good as her word.

“We aren’t like some of our neighbors in Central Asia,” Roza said during her speech accepting the Global Women’s Leadership Award in Athens, Greece, Friday evening,” where all the decisions are made by a small group behind closed doors. In Kyrgyzstan, we have a functioning democracy where everything is transparent and debated openly between the interested parties.”

Meanwhile, on the other side of the Mediterranean, in Cairo, Former President Mubarak provided a poignant contrast. He was found guilty and sentenced to life imprisonment for complicity in the killings of protestors during the revolution that toppled him. While the legal basis for the ruling is questionable, what no one doubts is that Mubarak’s real offense was running Egypt as his personal fiefdom for three decades, condemning most of the population to live under a regime of injustice and lack of economic opportunity. Will the verdict be upheld after the coming election? Will Mubarak make the legal outcome moot by faking a “health crisis” and being spirited out of a high end hospital and onto a Lear jet in the dead of night?

One hopes that in the wake of the tsunami sweeping the wicked and greedy from power in the Middle East, more selfless, true leaders like Roza Otunbayeva will assume power.

And if the day comes, in our lifetimes, when there is an election for the President of the World, Roza is getting my vote.