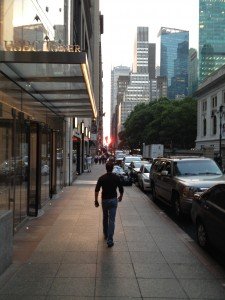 My Kinda Town, Manhattan Is

I finally got around to watching the “crock-u-mentary” “Micro Debt” by Tom Heinemann, which is basically a tour de force of microfinance detractors but with its primary target the destruction of Nobel laureate Dr. Yunus’ reputation. It’s very skillfully crafted, and Heinemann does a good job setting us up with numerous clips of Yunus receiving his many awards amidst sound bites about “putting poverty in a museum”, and even some incredibly ugly Stalinist billboards of Yunus with his arms spread messiah-like, plus an interview with what turns out to be the only client contacted (unless the others are on the cutting floor?) who smiles and says the Grameen Bank’s loans have helped her. The rest is a parade of witnesses, from the ranks of both clients and the Development Industry, who profess their conviction that microfinance has at best zero impact on poverty and at worst is a massive, four decade-long fraud perpetrated by Yunus and the rest of us practitioners upon a naive public and gullible Development Establishment. If you didn’t know Yunus personally, or had never met him (Heinemann qualifies in both respects) you would think from this film that he is among the ranks of history’s great villians vs. a tireless innovator of ways to help the people of his country — and the world — bootstrap themselves out of poverty. Which was how he was depicted in the 1989 doc done by “Sixty Minutes”, a show known for its hatchet jobs and ability to sniff out even the faintest trace of scandal. Yunus came out clean. Because he is clean. Despite his high profile and notoriety, he never — to my knowledge — made personal enrichment a part of his agenda.

The Development talking heads interviewed in the film decry the use by the microfinance industry of “client success stories”, alleging these are in fact the exceptions to the rule (one disgruntled Bangladeshi Human Rights workers concedes that maybe “as many as 5,000” of the 8 million clients of Grameen have benefited from the program), and the vast majority of our clients don’t benefit from MF, much less escape poverty. They don’t believe our stories, calling for “hard evidence” instead. Then what are we to make of the use of “stories” by Heinemann? Are “bad stories” Okay, representative of the true picture, and a valid substitute for research?

Let’s agree we need more research. And let’s get on with it. The Truth is Out There.