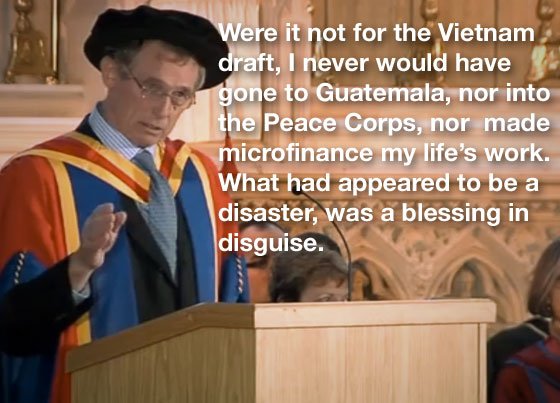 In March 2013, the University of Roehampton in London recognized the achievements of agricultural economist Rupert Scofield for his work serving low-income women and men as President and CEO of FINCA International. The University presented Rupert with an honorary degree as a Doctor of Laws.

Thank you Professor Harris for your kind remarks. And thank you, Vice Chancellor, for bestowing upon me this great honor. I accept it on behalf of my thousands of colleagues in FINCA International from over 30 countries who helped build our great organization.

And to those of you here who are also receiving degrees, congratulations. I suspect you may have worked harder for yours than I have for mine. You should feel proud today. But if I put myself in your place, I suspect there are those among you who feel a measure of trepidation about the future. What will be the next step in your journey?   Relax.    Forget the intimidating unemployment statistics. They are a gift in disguise. And not, as Winston Churchill said after being unceremoniously voted out of office, “a gift that is indeed very well disguised.”

If you don’t know precisely what the next step is for you, you are in good company. When I began my final semester at University, back in the spring of 1971, my name was entered into an unusual lottery; one in which if you won, you lost.   By that I mean, in this lottery, all our birthdates were entered into a bin, and selected one by one. Those who were among the first 100 chosen were drafted and sent to the Vietnam War. Mine was the 67th birthdate chosen.  This created a great dilemma for me, and no small amount of anguish.  I wanted to serve my country.  I wasn’t a physical coward.  But the war, in the words of John Kerry, a Vietnam veteran who is now the U.S. Secretary of State, had reached the point where, in his words, “No one wanted to be the last man to die for a mistake.”

Some of my classmates in the same predicament  went to Canada rather than serve. Some even went to jail. Then, for me, a door opened. I learned from a friend that by entering the Peace Corps I would be eligible for a two year deferment from military service. During the interview, I was asked which country I would like to serve in. I thought a moment. “Jamaica”?  “No, we’re going to send you to Guatemala, where you are going to work as an Extension Agent for an Agricultural Cooperative.”   “You do realize I was born in New York City?”

The Peace Corps assured me they would not only teach me Spanish, but also how to grow corn and beans.  They sent me to a beautiful little town 5,000 feet up in the highlands of Guatemala, San Martin Jilotepeque, in a lush, verdant valley with panorama views of active volcanoes. It was a tropical paradise. But the members of the cooperative, the descendants of the Maya, were cruelly exploited by the landowners and scraped out a living selling their labor and farming small plots of corn and beans. The Mayan farmers knew more than I ever would about farming. It didn’t take long for me to realize I would be more of a threat to their crops than a source of sage agronomic advice. But their land was severely depleted of its essential nutrients after generations of cultivation, and the coop members lacked the capital to buy fertilizers to restore its productivity. That’s where I could make a contribution.

We made small loans of — $50 – in the form of fertilizer, which carried an interest rate of 12% and had to be repaid in six months, when the crop developed.  It worked brilliantly.  The farmers were able to double and triple their yields. They were able to better feed and clothe their families. Most remarkable, of the 800 farmers we made loans to, 799 of them paid their loans on time and in full. I’m still looking for that one defaulter. His name is Alejandro Atz – if you ever find him on Google, Facebook or Twitter please contact me immediately.

After two years, it was time to go home. When I told the coop members I was leaving, their reaction amazed me. They begged me not to leave. Some wept and clung to my hands. I realized, then, I had made a difference in their lives.

Were it not for the Vietnam draft, I never would have gone to Guatemala, nor into the Peace Corps, nor  made microfinance my life’s work. What had appeared to be a disaster, was a blessing in disguise.

Your life may be a long and winding road that doesn’t always lead to the door you were expecting. But when fate opens a door to you, leave room for it to work its magic. You may find it leads to a life of excitement, service and satisfaction beyond your wildest dreams.

My final charge to you is this. Your professors have armed you with the most powerful weapon on earth.  A weapon of mass instruction. They have taught you how to think, to analyze and keep learning all the rest of your lives. You have been educated. Most people in this world are fortunate to have completed elementary school. And they have not been educated but programmed.  As such you are a part of a global elite.  This carries with it a great responsibility. Go forth and create something. Improve something. Change peoples lives for the better.   Change the world.