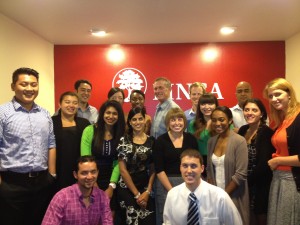 Yesterday I broke bread with FINCA’s Summer of 2012 Interns. A great group from around the globe who are helping us with various projects in our Finance, New Business Development and Executive departments. One of the great joys of running FINCA is meeting these young folks who have chosen a career in microfinance or international social enterprise. They asked me tough questions, including what was behind some of the criticism leveled at the microfinance industry in recent days (overindebtedness of clients, abusive collection practices; exagerrated claims of the impact of microcredit on poverty reduction, etc), and what was FINCA doing about it? My brief answer: some of the criticism is justified, but most could be attributed to a few bad actors, some of which are microfinance companies that scaled up too fast, but most are predatory consumer lenders masquerading as microfinance companies. As to what we are doing about it, FINCA is co-chair of the Microfinance Working Group (MCWG), a group of CEOs of the 8 major microfinance networks that meets monthly and is primarily focused making sure our subsidiaries and affiliates practice responsible microfinance. In a future phase of our efforts, we will launch a communication campaign designed to help both supporters and critics alike of microfinance to sort out fact from fiction and determine what is actually going on in the industry.

In an unrelated development, the first of the 17-year cicadas broke through the earth last night. Cicadas, like microfinance, are a polarizing issue these days. Some, like me, eagerly await their arrival, accompanied by the deafening cacaphony of their mating song, plus the happy crunch of their chitinous shells beneath our heels. But even those who detest them are careful not to show their true feelings. Besides being numerous (you don’t to be on the wrong side of a trillion-strong horde of large, winged insects which could put your eye out while cycling), they have another thing that the microfinance industry is only rumored (but never proven) to possess: a secret unit that seeks out and destroys anyone critical of their species. Cicadas don’t just dislke criticism, they hate it. And even if you’re not stupid enough to shout out ‘I hate cicadas!’, a word to the wise: cicadas are very good at reading body language.

So, they’re here. And, just like the microfinance industry, THEY’RE NOT GOING ANYWHERE! So better learn to love them.