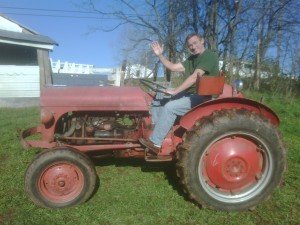 Long May You Run

Pictured here is a Harry Ferguson tractor, made in Detroit in 1950. It still runs. Okay, so the brakes don’t work, which my brother-in-law discovered when he fired it up and ended up crashing into and over turning his pick up. But what a beast! And still going strong 62 years later.

Had this tractor been made today, it would probably have a shelf life of about 5 years, thanks to Planned Obsolescence, which became all the rage shortly after this marvel of machinery was born in Detroit’s now quiet forge. What a brilliant innovation! Deliberately make junk that breaks and needs to be replaced a few years down the road, forcing your customers to fork over another big capital investment.

This idea worked fine until people began to think “Well, if I’m going to be forced to buy junk anyway, I may as well pay less for it.”

Hence the rise of China and the decline of Industrial America.

Okay, so it’s more complicated than that, but not much.

Meanwhile, as we look to the East — and the Middle East — it’s pretty much trouble as far as the eye can see. In Europe, it’s still who will blink first: Italian tax cheats or German and French bond holders. In South Yemen, a deal was struck which resulted in Saleh stepping down. But guess what? The Mob says “Not enough”. The Mob wants Saleh to be held accountable for his crimes and the murder of his countrymen. The Mob wants justice, in other words.

Meanwhile, our own Congress behaves as if it had all the time in the world to sort out our mess.