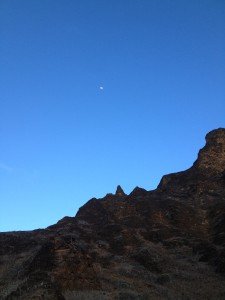 Dusk in the Galapagos

I promised myself I wouldn’t weigh in on the madness going on in our Nation’s Capitol, but since this is Washington, where promises are made to be broken, here I go.

I won’t pretend to be bi-partisan about it. To me the arguments are silly. Obamacare is the Law of the Land, and the rules say that the Republicans have to wait until they get back into power (3050?) before they get to repeal it. If it’s the fiscal deficit we are talking about, sorry, its coming down, faster than anyone expected. Entitlements? Fine, let’s talk about it, but not with a gun to our own heads.

Because if you think about it, why is it so impossible for our leaders to just sit down, in a smoke filled room and a tray of booze, like in the old days, and work this out?

The answer is not the Fiscal Deficit, it’s the Trust Deficit. It’s the same reason it seems that there will never be peace in the Middle East. The parties simply don’t trust each other. How they got to this point is a long story, with plenty of blame on either side, and a host of media people and lobbyists who got wealthy egging them on.

So what’s the solution? I think at this point we need an “intervention”, much as we had in Northern Ireland. An unbiased party, who can crack these stubborn heads together and persuade them to put aside their partisan agendas and do the right thing for the country.

Where are you George Mitchell?