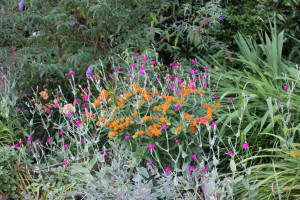 Jardin Moi -- Giverney got nothin' on you!

A bonnie day in our nation’s capital, where tassel-toed lobbyists buy our elected officials high and sell the public interest low. Some call it a moral sewer. We call it home.

I know I pledged to stay away from politics, but political promises are made to be broken, so allow me to share a call I put into Mitt last night to see how his campaign was faring. The connection was not great as he was trying to simultaneously wash both of Mrs. Romney’s Caddies, and I sometimes had trouble hearing him over the sound of the water glancing off the hoods.

“Mitt, the media is flogging a ‘Romney Ascendant’ theme lately. Is this just the usual handicapping of the glue-factory bound nag against the frontrunner, trying to keep us engaged in an otherwise pretty boring, foregone conclusion contest?”

“Rupert, you liberals really do make me laugh! For once, the drive-by media has got it right. It’s just a matter of time before the Golden Tablets replace your standard textbooks in High Schools around the country.”

I had to admit this was a thrilling prospect.

“How about the economy? They say that since the Bush Crash of ’07, the Average American’s net worth has declined by 39%. What would you do about that?”

“Well, Rupert, let me be clear: the Bush Crash was Obama’s fault. He was in the Senate at the time. He did nothing about it.”

“He opposed the Iraq War, didn’t he, which added trillions to the national debt?”

Apparently Mitt didn’t hear me. “And exactly who is this ‘Average American’ anyway? I don’t think I’ve never met one.”

I suggested it might be the kind of person who lost his job in one of his Hedge Fund deals.

“Oh, those guys! Yes, well, just wait until I get into office. The first year I will fire 40% of the American people. Just watch the efficiency of the workforce skyrocket.”

I asked him if that wouldn’t exacerbate an already huge unemployment problem.

“Rupert, you need to go back to school. The way it works is this. First, you cut taxes for the 1%. Then they invest in my hedge fund. Then I take a business, fire half of the employees, bury it with debt, and flip it for a 900% profit.”

“Back to the investors, of course. And then we do it again. And again.”

And this reduces unemployment?

“Of course! What do you think these people do with all this money I make them? They hire maids, gardeners, house servants, chauffers….”

I tried to tell him I got it, but my words were lost in a fresh blast from his garden hose.