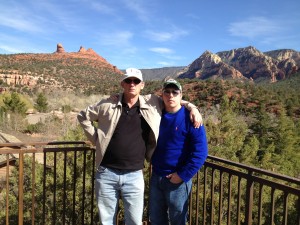 During the early years of FINCA, John Hatch pitched up in Arizona, living at times in Phoenix, Flagstaff and finally Tucson where we had our first ‘real’ office. During his brief stay in Flagstaff, he would take occasional side trips to Sedona, famous for, among other things, UFO sightings. He told me he met numerous people who claimed to have been “on board”, but which they didn’t mean having taken a cruise on the QE2.

Arizona is also the home of one of our long time board members and former Executive Director — “Mr Bean” in my book — who recently retired after years in the “workout” business. He saved many big name companies during his tenure there, and was handsomely rewarded for it. He also worked inhuman hours, and deserves every penny.

Talking to my son, who is at the point in his life where he’s trying to figure out which path to take, and what to do with his life, I told him that, rather than trying to amass fortunes, John and I had tried to save the world. “I guess we came up a little short, didn’t we?” I admitted.

“No you didn’t, Dad,” he said. “You’ve saved the world for millions of people you’ve helped through FINCA.”