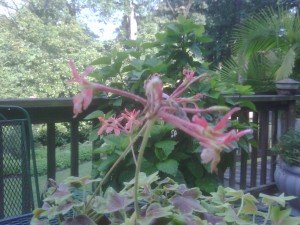 One Hummingbird Likes This

A female ruby throated hummingbird has become a regular visitor to the flower pot on my deck. She looks at me, annoyed (much like Lorraine when I disturb her in the middle of something) as if to say “What? You gotta problem?”, and then flits off. But I hadn’t realized they made a chirping sound.

I got another five star review on Amazon yesterday; the reviewer liked my description of some banking software as “buggier than nightfall over a Bangladeshi rice paddy”. The reference came from a trip I made to that country in the late 80s as a consultant to the UN Capital Development Fund to look at some agricultural credit schemes they had funded. I was in a guest house, and had boarded myself in for the night, when the air conditioning went off. Gradually, the temperature in the room rose: 90, 95, 100, 105… When it reached 120, I couldn’t take it any longer and flung open the unscreened windows.

To paraphrase D.H.Lawrence, describing what it was like to bed down with camel fleas each night in the Saudi desert: “And the mosquitoes rejoiced in the fresh meats served to them.”

Another week of high drama in our fair city with the Republican debate and Obama’s delivery of his job creation package. I enjoyed the debate; the candidates actually went at each other instead of taking the tiresome route of Obama bashing. I liked Huntsman the best, as the only one who seemed to understand that America lives in a new world dominated by the rising giants of China, Brazil and India and it would be competitive suicide to drop biology from our high school curriculae and replace it with Bible studies as Bachmann and Perry will do if elected. Rush Limbaugh cast a big, fat shadow over the debate and those two were careful not to say anything that might upset him and provide fodder for his talk show the following day. Obama’s stimulus, even in the unlikely event it passes, is not going to create enough jobs in time to save him. His fate is in the hands of larger global economic forces at this point.