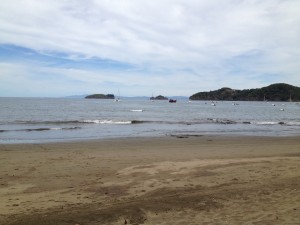 Forty years ago, the Peace Corps sent me and my comrades to Liberia, Costa Rica for two months to learn how to be farmers before we were sent on to Guatemala to serve as agricultural extensions to a small farmer cooperative. While a few in our group had actually grown up on farms, most of us were from New York, Chicago, or LA and didn’t know beans about agriculture, even after our intensive training. In my case, I eschewed giving the coop members advice on agriculture and stuck to credit, which I also knew nothing about but which put me on the same level as my customers. Little did I know then that forty years later I would still be making loans to poor people in developing countries.

Back then, Liberia was a small, hot town in the northern province of Guanacaste, whose best attribute was its proximity to the beautiful, undeveloped beaches of the Pacific Coast. The closest was Playa del Coco, a beautiful crescent beach with a small bay hosting a handful of sailboats (mostly belonging to gringo amateur weed smugglers) and one restaurant which was kind enough to allow us to sling our hammocks on the roof. If you went swimming at night you kicked up a trail of phosphorescent plankton which mirrored the stars overhead. One night we saw that, following at a distance of about fifty feet, we were being trailed by dorsal fins kicking up phosphorescent plankton of their own.

Costa Rica in general and Guanacaste in particular have long attempted to draw their share of American retirees, but that trend picked up momentum about five years ago when, due to the murderous drug-related slaughter, Mexico became off limits to America’s plentiful gerontological exports. Add that to the flood of cheap credit after 9/11 which put ‘funny money’ into the pockets of the American middleclass in search of second vacation homes and you explain the transformation this once unspoiled paradise has undergone.

Not that it’s totally wrecked. But a Four Seasons in Guanacaste? And the jungle mountain tops all clearcut to build gated communities?

One thing the Ticos have done right is that no one — foreign or national — is allowed to actually buy the beach, so everyone has the same access. Unlike Barbados and Lake Tajo where you have to drive miles and miles before the walls come down and give you fleeting glimpse of the water. Another thing they have done right is string ‘monkey bridges’ across the roads so that our primate cousins can cross the road without getting squished by rental cars or electrocuting themselves taking their chances on the power lines.

At present, due to the downturn, much of the new real estate has gone begging. There is a particularly ugly condo complex in between Playa Hermosa (where we’re staying) and Coco which went bust when the developer discovered there was no water available. (Note to potential retirees: turn on the faucet when doing house tours).

The one thing I didn’t find at Coco was the 23 yr old whose whole life lay before him, an adventure that would take him to over 50 countries and in collision with some of the most unforgettable characters — including no small share of thieves and brigands — this small planet has ever known.