This piece was originally published on the FINCA website. I just felt I had to share it here as well!

I got the sad news yesterday, via Twitter, that one of the people I most admired in this world, Naima, had passed away.   The tweet was from Basha, who is married to one of Naima’s daughters (and who had accompanied Naima to the Sheraton Hotel in Kampala, Uganda, to meet with me several years ago, an encounter which led to my decision to employ Naima as our first Ambassador in that country.

Naima’s qualifications for the job were impeccable.   She was one of our most successful clients ever, having clawed her way out of severe poverty over the course of a decade during the 90s, powered by a series of FINCA loans. She had so impressed our staff that, when our other, slightly more famous Ambassador of Hope, Natalie Portman, visited Uganda in 2004, they put her forth as someone Natalie had to meet.

Natalie and I met with Naimi on a hot morning in Jinja, Uganda, a town situated at the source of the Nile, complete with a statue of Speke, the Brit explorer who claimed to have “discovered” the place where Ugandans had been living since time immemorial.   Naima took us to the back of her restaurant, which she ran with the help of her four daughters, and, while a journalist from Reuters looked on, told us her story: 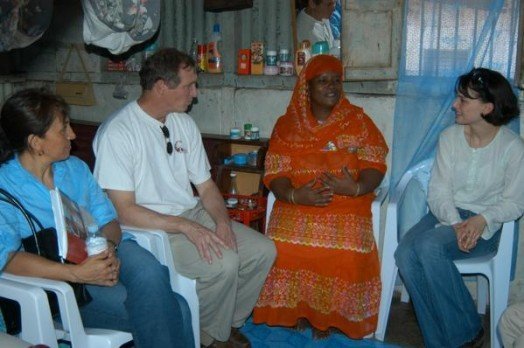 “I was born in the Iganga District of Uganda in 1958. In my family, girls were not permitted to have an education, but my brother secretly taught me to read and right.   I was married at the age of 13, and born my first child, a daughter, at age 15.   I had five more daughters, which displeased my husband, who wanted sons, and so he divorced me.   We were living in Mombassa, Kenya, at the time, and I moved then back to Uganda, where I married for the second time. My second husband died when I was 33, leaving me to care for my eight children. We lived in a one-room dwelling, and I supported my family by cleaning people’s houses, who in return allowed me to take their table scraps and wash my family’s cloths with their used dish water. Many days, we had no food at all.

In 1996, a friend of mine told me about an organization named FINCA that made loans to poor women so they could start businesses and support themselves and their families.   She took me to a meeting of her village bank, where I was introduced to the other women.   But the women decided that I was too poor to join their village bank, and would not be able to repay the loan, meaning they would have to repay for me.   I got down on my knees and begged them to accept me. Four of the women took pity on me, and said they would pay for me if I failed to repay the loan.   In this way, I was accepted.

The first loan I received was 50,000 shillings (US$ 40).   I didn’t know what to do with so much money.   My four friends in the village bank invited me to go with them to a nearby village where they was a good crop of tomatoes that would could buy and bring back to Jinja for reselling in the market.   The plan worked fine, but by the time we returned to Jinja, the market was closed.

That night, I slept with the tomatoes. The next morning, I sold them all at a good profit.   After years of hard work, aided by increasingly larger loans, I eventually saved enough money to buy this restaurant. And now, the best news of all, I have bought a plot of land, in town, and am building my own home.”

Naima related all this, quietly, with a transcendent dignity born of a life of struggle and setbacks, none of which stopped her and, on the contrary, fueled her determination.   At the conclusion of Naima’s narrative, the Reuter’s journalist asked Natalie what she thought of all she had heard. Natalie, in tears, shook her head and said “I don’t have problems.”

Years later, in preparation for a visit to Uganda, I asked our CEO, Julius, to get in touch with Naima and if possible arrange a meeting.   “I am sorry to say that Naima is not well,” Julius responded.   He went on to tell me that Naima had suffered a series of setbacks, which had left her in dire circumstances. First, her mother had fallen ill.   To take care of her mother, Naima had left her business in the hands of one of her daughters, who was not up to the task of managing it, and had been forced to sell it to the landlord. Then Naima herself fell ill, with cancer.   She entrusted her care to a fraudulent doctor, who took all her money.

I met with Naima at the Sheraton, Kampala Hotel, a venue that held many memories for me.   It was there, back in the mid 80s, that, unable to afford to actually stay there, I used their telephone and tea room as a communications and meeting center, subscribing to the “fake it until you make it” philosophy.   It worked, and today FINCA Uganda has over 55,000 clients and a loan book of $20 million.   Also, it was in the Sheraton San Salvador, on the other side of the world, that my boss, Michael Hammer, was gunned down by a Death Squad in 1980.

As I listened to Naima relate her story, with the same quiet dignity as when we had met with Natalie, I kept thinking: “This can’t be.   Our most successful client ever, not just in Uganda but the world, and it has all been erased.   What a tragedy.”

Being the CEO of a global company has its drawbacks, but there are times when the advantages far outweigh the liabilities.   I decided then and there to invoke “Executive Privilege”, and deviate far from our normal policy of treating every client the same, i.e., that our job was to provide financial services and not to take responsibility for whatever else was going on in their lives.   No, Naima was different.   Maybe we couldn’t solve every problem our clients faced, but as in that wonderful line from the movie “The Year of Living Dangerously”, when fate put someone in our path and we had the opportunity to help them, we had to do it.

After the meeting, I told Julius that we had to hire Naima, and that she needed to tell her story to our other 50,000 clients, most of whom were women in circumstances similar to hers when she joined FINCA, and to inspire them to do for their families what she had achieved with hers. At the time, I thought I was performing an act of charity, putting her on the payroll, and inventing a job for her.

How wrong I was.   A few months later, a picture arrived with Naima, dressed in a gown she had made herself, celebrating her new role as our first Brand Ambassador.   She went from village to village, telling all the women:   “When you have problems, FINCA will never abandon you.” It was a powerful message.   Our retention rate soared.   Despite the highly competitive market in Uganda, our client list grew.

There are things I’ve done in my life I am ashamed of, but of all the things I am proud of I don’t think any can equal my decision to throw a lifeline to Naima in her hour of need, an act she repaid many times, and will, as long as my own struggle lasts, challenge me to live up to the impossibly high standard she has set for us.