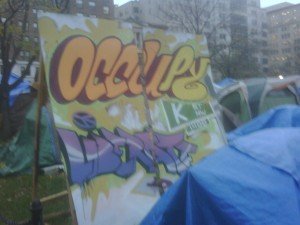 Under a warm rain, I took a walk through McPherson Square, where the Occupy D.C. movement has set up one of their camps. More than a collection of tents, which is what I expected, it’s morphing into a village with a library, a tea shop, a tour guide business, and a place that lists the kinds of donations they would appreciate, from pharmaceuticals, to food and clothing. They have even organized a government.

There is an air of permanence about the place, as if everyone plans to be there for a long time. One of the most interesting things about this leaderless, agenda-less movement is that, unlike the Tea Party, it has so far proved very difficult to co-opt by one of the major parties. Democrats don’t want to touch it, realizing the moment they do Rush and company will cry ‘Ahhhh, class warfare, we knew it!’ Republicans initially attacked it, but it’s hard to keep up a sustained assault on something that just says ‘I’m here, I’m a reality, what are you going to do about it?’ It’s also hard to redirect their anger and frustration from “the one percent” to “liberals and socialists” when you ARE the one percent.

The elites in the Third World have long ago mastered the art of ignoring poverty. I remember one of my colleagues who had lived all his life in a South American country, and, until he joined FINCA told me “I never realized there were people so poor in my country.”

Perhaps a year or two from now, Occupy D.C. will still be there in McPherson Square, but we will have learned how not to see them.