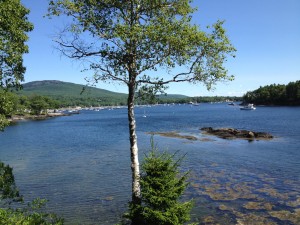 This morning I rose early, went out on the deck with a pair of binoculars to watch the birds take their breakfast. For one seagull it was plucking a live crab from the water and piercing its breastplate with a beak ideally suited for that purpose. The crab didn’t take it lightly and got in a few pinches to the gull’s face and eyes before giving up the ghost. Then I watched a Great Blue Heron (the avian version of a giraffe) wade into the shallow water where it “listened” first with its feet and then bent its head until its ear was just a few inches from the surface, and then, quick as a dart, struck with its long, sharp beak. The eel wriggled for a while as the Heron tried to figure out how to gulp it down — which entailed briefly slackening its grip on its prey — without dropping it. Finally, there was an enterprising seagull who had figured out that by dropping a sea urchin form a height of 30 feet onto the rocks it could save itself the pain of getting a faceful of the urchin’s sharp spines.

Balzac loved eels. Read his “Contes Drolatiques” — I think the one called Sarrasine — for the greatest description of a banquet ever written.

Last night Lorraine’s mother related stories from her childhood during the Great Depression. She recounted how her father, when his patent medicine business failed, bought an 8 acre farm that allowed him to feed his family. She told us how at school she was one of the children fortunate enough to bring lunch to school — usually a bisquit her mother baked — as many of the other kids parents couldn’t afford to give them lunch, and the school provided nothing. She said she felt terrible when the other kids would beg her for a bite of her biscuit, but she only had enough for herself.

It’s hard to believe, in the midst of plenty, that 83 years ago America began a descent into poverty along with the rest of the world that lasted for over a decade. Unemployment in the US was 25%.

We did some stupid things back then that helped to kill the global economy. We’re smarter than that now — right?