Onward and Upward, Downward or Sideways? 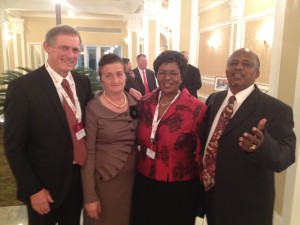 London is showing us her gray face today, a perfect opportunity to catch up on my social networking. I’ve been out two weeks now, in the Republic of Georgia for a five ring circus of board meetings for FINCA International, FINCA Microfinance Holdings and our 7 subsidiaries in Eurasia, Afghanistan and Jordan, and then a brief visit to Berlin for a G20 workshop with 15 prize-winning social entrepreneurs from around the world. I’m going to be mentoring Silvia Adie, a social entrepreneur from Colombia who manages an innovative microfinance scheme sponsored by a power company, which makes $500 loans to low income families so they can hook up to the natural gas grid, which would otherwise be unaffordable to them. It’s a very ’empowering’ program, because it gives poor families access to a reliable, affordable source of energy for cooking, saving the female heads of household zillions of hours of scavenging for other sources of fuel.

I like that empowering concept for a number of reasons. Whenever I prepare for a FINCA board meeting, whether of the mothership or a sub, I try to evaluate our results against factors we do control, versus factors we don’t. I spend almost no time dwelling on the uncontrolled factors as an excuse for falling short of goals (and I’m not sympathetic to my staff who try to do so), but rather ask myself if we have done enough with the resources under our control.

Makvala, pictured here with long time FINCA International Board members, Agrinna from Malawi and James from Uganda, is a good example of a FINCA client who has been dealt a difficult hand, at times, but always manages to bounce back. A client since 2006, Makvala initially had a clothing business, but this was wiped out in 2008 when the Russia-Georgia conflict erupted. Undeterred, she shifted strategies and began investing in her small farm, where she has milk cows, grapes, vegetables, and fruit trees. The diversification strategy has paid off and with the income stream from these agricultural investments she has been able to improve her home and buy a car for her son, which enabled him to get a job with the local government.

Back home, other than our individual votes, we don’t have much control over what will happen on November 6th. The choice has become more focused, thanks to Romney’s unintentional unveiling, finally, of his intended strategy. He’s going to shred the safety net, in hopes of forcing the 47% of ‘Takers’ in the country to ‘take’ responsibility for their lives. Like they don’t now, presumably. Because they don’t work for Bain Capital, they don’t have ‘real’ jobs, earn enough to pay taxes (at higher rate than Romney), and they in some way benefit from government programs that enable them to do things they could not normally afford, like eat and educate their kids. Romney, once he takes away their ‘entitlements’, will focus on ‘Givers’, and ‘give’ them a big tax break. A strategy that has always worked before, right? I mean, the Bush tax breaks created the current high levels of employment and middle class prosperity we enjoy today.

Obama, if elected, will likely not be able to do much more than talk about the things he would like to do — if we only had the money. But we do not have any money. That is why, I suspect, he has been so non forthcoming about his plans for the second term. Because without resources, you can plan all you want, but you can’t execute.

So is all this cause for despair? I don’t think so. Because, in the end, it won’t be the government, Republican or Democrat, that gets us out of the mess we are in. It will be the initiatives of millions of businesses and individuals, taking whatever hands we are dealt after November 6th, and doing what we can do with the resources we control.

So let’s shut out the political static and start thinking about what we’re going to improve our own lives, our country and finally our world. Let’s take a page from Makvala’s book.