On the Azeri Highway 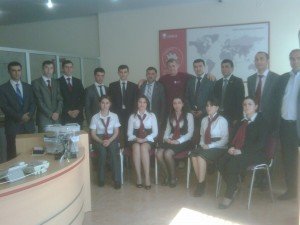 Today I drove 2 hours west out of Baku, in the company of a translator and camera team, to do some interviews with FINCA clients and employees of our Samaxi branch. It’s surprising how quickly the madness of Baku falls away and you find yourself driving through a dry, barren landscape of high rolling hills some of which are crested by jagged dolomite dikes, the only thing to have resisted the eons of erosion. As you approach the foothills of the Caucuses, however, the desert gives way to richer grazing lands covered by taller grass and forests of pine and hardwoods whose leaves have begun to turn with the colors of fall in New England. I love being on the road with my FINCA homies but hate missing autumn back home.

The clients I met with were all either sheep herders or traders. Two of the former had taken out FINCA loans of $500 three years ago, which enabled them to buy a dozen sheep, mostly females, who produce one lamb per year. They sell the males after six months for about $100 each, and the females produce their own lambs for the next 8 to 10 years, after which they are……….well, you know. The sheep herders subsequent loans had been invested in renting more land and sowing it with feed crops, like alfalfa. The ambition of one was to grow his flock to 300.

The trader I spoke to had started with a small shop and over the course of 5 years had opened a second one on the outskirts of Baku, where he employed four other people. His turnover from both shops was about $3,000 a month, from which he said he netted 10% although I suspect from the way he was grinning it was much more.

Afterwards we went to the market where we interviewed another trader who had a market stall where he sold cucumbers, tomatoes, peppers, egg plant, onions, potatoes and green beans, all organic. The branch manager told me they fetched a premium in Russia. Our trader client obtained his produce twice weekly from farmers who came in from the countryside, some of whom also traded for their own account. The “day traders” paid about $1.30 to rent space in the market while the permanent traders got a stall for about $45 a month.

I don’t why, but I never get tired of talking to FINCA clients. I guess it’s because I’m still partly amazed that I can run this whole operation from our small office in Washington, D.C. (and sometimes from the deck of my house in Bethesda, Maryland) without the wheels falling off. Of course, in the early days, the wheels did fall off, and often. But we never gave up. And look at this network today: 900,000 clients in 21 of some of the craziest countries on earth. I wish I could fill a stadium with them someday, so they could all meet each other and exchange stories. Those stories will fill a library.