Of Guns and Global Warming 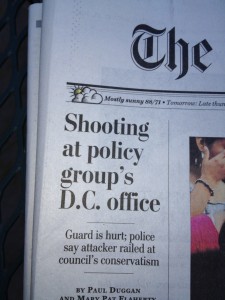 No, there is no “causality” between the two of which I am aware, but there is a connection, which I will explain. And, yes, I know I promised to stick to microfinance and avoid highly charged, highly partisan ‘third rail’ topics like Cicadas, Don Quixote, Kim Kardashian (Okay, so my cover is blown on that one, thanks to my Social Networking Guru, Filip, catching me and Kim out on my birthday

The connection between these two issues, I believe, is that when, less than 75 years from now (the world my grandkids will inherit from us), when enough of the polar caps have melted to raise the ocean level 3 feet, displacing 600 million people, and when another 2.1 million Americans have been cut down by non-combat related gunfire, I think that generation will curse us for our inaction. They will ask ‘Why did they let these powerful energy and gun lobbies dictate the policies that destroyed our world and left behind millions of grieving families?

Even if human activity turns out not to be the main cause of global warming – something only a handful of reputable scientist believe — I’ve never understood what we have to lose by replacing fossil fuels with clean energy. Less pollution? Less dependence on foreign oil? Less oil-funded terrorism? Perish the thought.

I know the argument about ‘people kill people’, but the fact is, guns make the taking of human life far too easy, too user friendly. My friend Al Moore from the Labor Movement, a good, conservative Texan, told me he was against guns because “Rupert, if I had a gun in my house my wife would have shot me a long time ago.” I actually do own a gun, and its in my house. I keep it because I have never lost the fear I felt during my year in El Salvador, when there really were people out there who might have killed me because of the work I was doing on Land Reform. I don’t want to be helpless – as some of my colleagues were –if someone breaks in and threatens my family. I recognize my hypocrisy here. But if guns were more scarce out there, especially assault rifles, I could probably give up my gun.

As our politicians sell us out to special interests and fail us, time and again, in fixing these Big Problems, we can, by a trillion individual decisions in our daily lives, arrest Global Warming before it does more incalculable, irreversible damage. And we can finally become fed up enough with the slaughter to force sane gun regulation at the Federal level, as we did with Civil Rights, when a number of States failed to act (as they will with gun control). But we have to get moving. So far, the Special Interests, while they probably don’t outnumber us, have us hopelessly outgunned when it comes to buying influence and making the rules.