Of Drugs, Deficits and Democracy 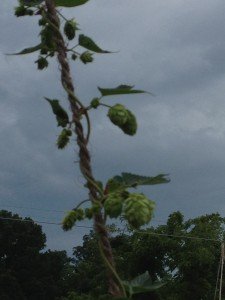 No, not Jack’s Beanstalk, my son’s hops plant

During my summer reading I stumbled upon a volume of the life of Paul Gauguin and learned, among other things, that he had a Peruvian grandfather who lived to be 120 years old, married (for the 3rd or 4th time) at 80 and fathered 3 more children. Testifies to the salubrious effects of ceviche.

An unexpected benefit of the government running out of money for just about everything is that politicians across the board are being forced to rethink stupid policies. There is probably no better example of bad policy causing massive economic and social destruction on a global scale than The War on Drugs. True, narcotics create addicts whose lives are destroyed. But in our efforts to prevent people from using illegal drugs, we have employed tactics which massively inflate their prices, and, hence, their profitability to the criminals who manufacture and market them. This, in turn, has created a trillion global dollar war chest the criminals can use to corrupt the law enforcement community, political establishment, military, and justice systems of the unfortunate countries that serve as conduits to the wealthier nations that consume them. The culture of violence and lawlessness that characterizes these countries kills far more people than drug overdoses do. In the U.S., about 2,000 people a year OD from heroin, whereas half that number are murdered in drug-related violence. But if we go across the border the picture changes dramatically. In Mexico, the war still rages, and 4,249 people in Mexico were murdered in the drug wars in just the first four months of this year. Central American countries are likewise setting world records for drug-related murders.
In this country, “zero tolerance” for drug users has led to millions (I’m counting family members of the incarcerated) of lives being destroyed by minimum sentencing laws for people busted for small amounts of drugs. These people were more often than not sentenced to years in prison for non-violent crimes because politicians wanted to prove they were “hard on crime”, or, if they were liberals, that they weren’t “soft on crime”. Fortunately, this is beginning to change, but not because of the inhumanity of the situation but because the federal government and the states – even red ones – can no longer afford to keep over a million people behind bars. Education and Rehab are finally taking the place of punishment as the way to cure addicts.

Meanwhile, back in Latin America, a number of former heads of states are calling for drugs to be legalized. I had always thought this was at least worth trying, but when I went to Medellin, Colombia recently, I heard a different view from the taxi cab driver. “We are totally against legalizing drugs,” he told me, as we wheeled through the beautiful, verdant, mountainous countryside. “Drugs destroyed our country, and we never want to go back to that.” But then he grinned. “The Mexicans and
Central Americans are mad at us, because since we drove out the drug lords, they all moved to their countries.”

So the Whack a Mole approach doesn’t work either. Just gets the action closer and closer to our own borders.