My Life in Dogs 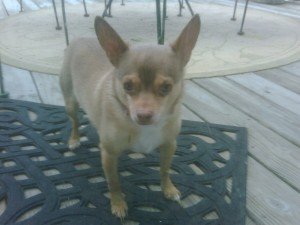 See Dis? I Am The Rabbit Hunter

He was there again this morning, the deer, when I went out to get the paper. It’s getting creepy. He looked at me this time, the same way those ducks looked at Tony Soprano.

I’m going to dedicate this blog to Bruno (pictured above, waiting for me to open the door to the deck and let him in, for the 10,000 time), and to an explanation of how, after spending most of my life as an owner of “real dogs” , I became a “small dog” man.

But first, let’s give Bruno his props. Yesterday when I let him out into the back yard, I noticed he was not alone: there was a young adult rabbit there, eyeing him in terror. This had happened before, and the rabbit usually had the sense to remain motionless, in which case Bruno could walk within a few feet of it and not see or (apparently) smell it. But this time, for whatever reason — maybe it felt too exposed — the rabbit bolted, and Bruno shot after it, running faster than I had ever seen him run before. The rabbit made a potentially career-ending move then, dodging into the side yard which was totally closed in and provided scant cover, except for a small azalea bush. I braced myself for a bloody finish. But apparently it was enough to fool Bruno (it doesn’t take much, to be honest), for he broke off the chase.

We acquired Bruno while we were “between dogs”, our Corgi and non-descript Costa Rican street dog having died within a few months of each other. Bruno was smuggled onto a train in Boston and brought to Washington by my daughter, who had received him as a gift from one of her high school mates. This same mate ran for public office last year here in Maryland, and solicited me for a campaign contribution. I sensed an opportunity to “regift” Bruno, but was dissauded by my horrified family.

I wonder if Bambi will be there again tomorrow.