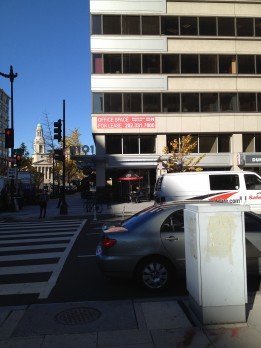 Tomorrow we move FINCA out of 14th and L St, where we have resided for the past 17 years. (Well, my staff will, I’m here in London) Back in 1996, it was a hard sell for me to persuade our Board that being in Alexandria, Virginia, was not much better than our previous office in Tucson, Arizona, because, basically, no one from USAID, the World Bank, the Inter-American Development Bank or our other funders every made the trip across the Potomac to visit us. But what really clinched the deal was, at the time, the rent was $14 per square foot, which was cheaper than what we were paying in Alexandria. The reason it was so cheap was that you really didn’t want to leave the office after dark. The neighborhood was quite sketchy in those days.

Today, that same space goes for over $50 per square foot, and the neighborhood has become more “respectable”, populated by high end hotels and eateries where the K Street Lobbyists go to sell our Democracy to the highest bidder.

But more dramatic than the rise in the cost of the rent is what happened to FINCA during those years. When we arrived, we had fewer than 100,000 clients in seven countries of Central and South America and the Carribean. Our loan portfolio was less than $10 million. Today we have over a million clients and close to $800 million in loans.

Many people passed through our doors during those years. We had great fun. Many are still with us. But many more are in the category of FINCA alumni, and when I run into them, as I often do, I try to remember to thank them for their contributions. For those of you who I forgot to do that, let me say it here: THANK YOU! You help to make us the great organization have become.