More on the Book of David (Roodman) 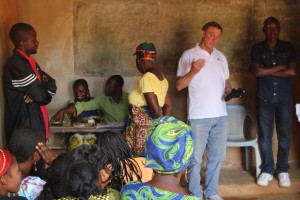 A Congolese Village Bank in Lumbumbashi

I’m back from a regional meeting of FINCA Africa in Lumbumbashi (say it with me), Democratic Republic of the Congo, during which I was able to meet and interview about a dozen clients. Stay tuned for a posting of this, hopefully next week.

In the meantime, I want to return to my critique of David Roodman’s “Due Diligence”, and thank him for his response which you may find on David Roodman’s Open Blog on Microfinance Wid all due respect, as Tony Soprano would say, I remain unconvinced of David’s conclusion that the impact on global poverty of my 40 year career in microfinance has been zero. It is as if I had never lived! Now, I was of course foolhardy to try to engage David — a econometric Goliath – on his own terrain. I recall the precise moment, as a Master’s Degree candidate at the U of Wisconsin, when I realized the statistical life was not for me. It was Euler’s Theorum that did me in. I canvassed the campus in vain for someone who could explain to me, in plain English, what was meant by “For homogenous functions there is a definite relationship between the values of the function and the values of its partial derivatives.” Cool! But, like, can you use that to launch a rocket? So I guess at this point the only way I will get my Doctorate is if some university bestows an Honorary Degree on me. (Any takers? No?) But not to beat a Hypothetical Horse, I think David, in his faith in the power of numbers, has strayed too far from the path of Common Sense. Example: If, as David concludes, there is value to be found in the creation of an industry that has corrrected — for many millions of people — the “market failure” of financial systems in Developing Countries, is it logical to then conclude that the impact on global poverty of this gargantuan investment has been zero?
Are we to believe that joining millions of people who earn their living each day in the informal sector, and who previously had no access to credit or savings services, and now do, are not materially better of as a result of it? I think these two conclusions marry up like drunkards in a Las Vegas wedding. Let’s get them across the border to Mexico for an annulment.

Let me conclude this post with two stories. Now, I know David hates stories, but I venture to say he might like one of them. The first was a woman who has been working with FINCA Congo for the past five years. She initially sold shoes, and then, with the income she earned from that and subsequent FINCA loans, she was able to open a second business selling groceries in her home. When I asked her how she rated FINCA’s service, fishing for an answer as to how efficient, responsive, friendly, etc our staff was, she replied: “FINCA has lifted me out of misery and given me my independence.” Wow, sounds suspiciously like empowerment. David would say “No causality!” Rupert would say “Hey,listen to the woman! Maybe she’s not making it up!”

The second story comes from a village bank I met with. I asked the group of women which service they valued most, access to loans or our savings accounts. Again, their answer surprised me: “Savings,” they said in chorus. Why? “Because it is our money.”

Over to you, David.