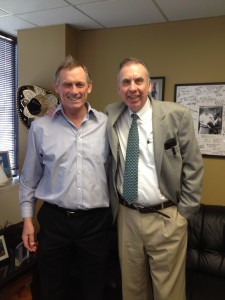 Richard Oulahan, one of my old running buddies from my trade union days paid me a visit yesterday, to interview me for a book he’s writing on the life of Michael Hammer, our boss who was assassinated by a death squad in 1980 at the height of the civil war in El Salvador. We hadn’t really talked about it during the past 30 years, and it was surprising how much each of us remembered about that sad period. It feels like another lifetime to me now. We lived with an intensity I haven’t experienced since.

It reminded me of a conversation I had with a Costa Rican who worked for FINCA back in the mid 80s. Costa Rica had never been drawn into the violence sweeping across the other Central American countries, but in this guy’s case, he took it upon himself to get involved, running guns to the Sandinistas across the border shared with Nicaragua. Describing how he used to ferry them in a small rowboat across the bay the countries shared, he sighed, smiled and said “Ah, that was my epoca!”

I asked what he meant by “epoca” (epoch).

“Well, it’s a time that, while you’re living through it, you don’t think of it as anything special. But years later, thinking back on it, you realize that you have never lived with such passion and excitement since.”

He paused and added: “And that you never will again.”