Meanwhile Back At La Mancha

So the intro to the “Segunda Parte” of Don Quixote can only be described as surreal. Miguel resorts to a device which today would be unthinkable: he has his main characters confront a supposed “scholar” who relates to DQ and Sancho all the mistakes in the “Primera Parte” (like Sancho riding off on a mule in one chapter and reappearing on a horse in the next, not to mention him being left in the company of 100 “escudos” (gold coins) in one chapter and then no further mention being made of them — come on! The guy was broke!) and then gives them the opportunity to explain them away (which they do, with the credulity of Admiral Poindexter at the Iran Contra Hearings “Uh, I don’t recall…”) — but then comes the really amazing part: Sancho asks the scholar if there is going to be a sequel to the Primera Parte, and is told that “Well, some are saying that DQ should stop here, quit while he’s ahead, in other words, while others are clamoring for more of the same.”

Wow. So that’s where Hollywood came from.

But, to contradict my wife, Sweet Lorraine, let’s ask the question: What about me? Given that “The Handbook” is already flying off the shelves (Barnes and Nobles has been unable to keep it in stock in Bethesda, Arlington and Georgetown, at least), should I be thinking, already, about “Son of The Social Entrepreneur’s Handbook”?

This, of course, carries some risk. Son of “The Blob” — well, who would have believed that a ball of jello could reproduce. Maybe asexually. Rocky II through XXXXIV, we know about that one.

Truth is, I long to return to fiction. Oh, please, as Papa said, let me “invent rather than describe.” 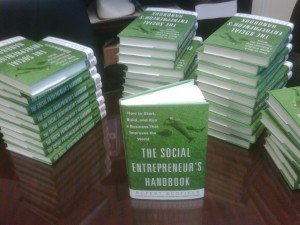