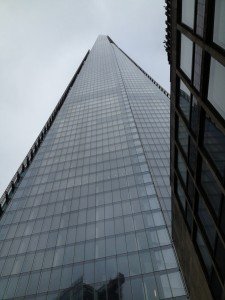 The Shard - The View from the bottom is free

FINCA UK’s office is in London Bridge, at a startup incubator called The Exchange, next to a rather imposing building called “The Shard”, for its resemblance to a gigantic glass splinter. Turn it upside down and you would have a dagger aimed at the heart of London. You can ride up to the top and enjoy the view for a mere 25 pounds. Sorry, champagne and canapes not included. I can’t say if the view is worth it because I didn’t go, and at that price never will.

March already. One sixth of the year already behind us. How are we doing? It depends on who ‘we’ is. Here in austerity obsessed Europe and the UK, a triple dip recession is in the cards. Back home in the USA, neither Obama nor Boehner blinked, so we are going to see if the Pentagon really can survive on 90% of its budget. We live in The Age of Paralysis, where governments are either corrupt, incompetent, paralyzed by partisan squabbling, or all three. It’s a sign of the times that I think how lucky I am not to be living in Syria.

It makes me think of Malcom Lowry’s words, penned at the onset of WWII: “Life would be hard, or life would be easy, but in any case, one’s own struggle would go on.”

I had one of my standard anxiety dreams last night, but with a new twist. Word reached the Bethesda suburbs that there was a mass murderer moving through the neighborhood, carrying an arsenal of assault weapons,grenades and semi-automatic handguns, shooting people and blowing things up. I went into the closet for my duck gun (don’t worry, Natalie, I haven’t used it in 20 years), and then to Lorraine’s closet for the ammo, which I keep in an old blue plastic Pan Am toiletry kit, from the days when I was a consultant and flew First Class. To my horror, it was gone.

“Lorraine, have you seen my shotgun shells?” I called out to my wife, who was still sleeping. She muttered something about having done ‘some cleaning up’, and went back to sleep.

In our house, we have a term for ‘some cleaning up’ when Lorraine is doing the cleaning. We call it ‘snow blowing’. It means that, having become fed up with a part of the house that has become disorderly, Lorraine sets upon it with the zeal of a Toro snow blower, sending everything — mislaid Redskins tickets, long lost diamond ear rings, valuable buy-one-meal-get-one-free coupons etc — flying into the dustbin. Nothing is safe in her path. Afterwards, we argue who lost these things.

Fortunately, I woke up just as the demented shootist was turning onto Wehawken Road.