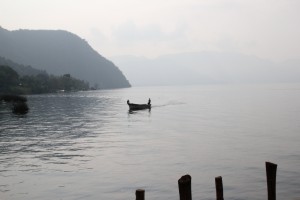 I went back to Guatemala last week for a 40th reunion with my Peace Corps buddies. Five of us made it, and it was fun to try to piece together all those memories of when we were 22 years old and intent on changing the world, and living in a virtual Garden of Eden of tropical rain forests, beautiful lakes and spectacular, active volcanoes. As a special treat, one of our number had visited the Peace Corps office in Antigua and recovered our Termination Reports, written back in 1973 when we were on the verge of going back into “The World” and catching up with our former lives.

Looking at my report, I was taken by a prophetic line I penned back then: “Given the degree of ignorance and determination with which the upper classes in Latin America close their eyes to the crisis of the peasants, there is little hope for a non-violent revolution.” It would be a mere five years later when the whole Central American region blew sky high, beginning in 1977 with Nicaragua and spreading to Guatemala and El Salvador. Hundreds of thousands perished in the process.

While the revolutions brought a degree of stability to Nicaragua and El Salvador, Guatemala finds itself still a deeply divided society. Historically, the ruling elite established a Pay-for-Justice Society that worked well for them throughout the post colonial period and up to the civil wars of the 1980s. Thereafter, the drug lords moved in and outbid them. As a result, they now find themselves increasingly the victims of kidnapping and extortion operations, the latter of which are managed through mobile phone death threats which, if the recipient is unresponsive, result in the murder of himself and his family. One consequence of this breakdown of Law and Order has been to fracture the society into three pieces, each of which is fending for itself. The wealthy have their fortresses and incorruptible (they hope) private armies to protect them. Oddly enough (or maybe not), the indigenous people are the most cohesive, with their own values, customs, traditions – and now their own vigilante justice system. This was in prominent display a year ago when, after indigenous women were robbed in the Panajachel market place in broad daylight, the local Indian men brushed aside the local police (knowing they would cut a deal with the crooks, split the proceeds and release them), took possession of one of the perpetrators and burned him alive in the middle of the street. They haven’t been robbed since.

In this new reality, only the working and middle classes are left to cope for themselves, and they have adjusted to their new circumstances. They never answer their cell phones unless they recognize the number. They band together to deny entry to strangers to their living compounds, and put in surveillance cameras to monitor when strangers try to slip death threats beneath their doors. Those who can’t afford such measures simply move out of the neighborhood.

The recently elected President was swept into office on the strength of his pledge to restore Law and Order in Guatemala. It remains to be seen whether he can prevail over the entrenched criminal element, and get Guatemala “back to the Garden”.