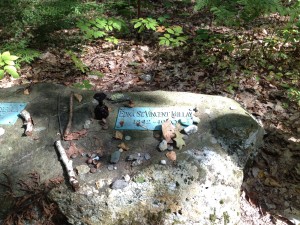 Edna St. Vincent Millay has always been one of my favorite American poets. She was a total rebel, a Bohemian long before Jack Keroac and others made it fashionable. Her poem ‘Renascence’ was often quoted to me by my great uncle John because it began with lines describing the view from Mt. Battie in Camden, Maine which overlooks his cottage: ‘All I could see from where I stood, was three long mountains, and a wood.’ It got more profound after that. In 1917, Millay was a sensation at age 25, and used to draw huge crowds to listen to her recite her poems.

Millay was born in Rockland, Maine (two towns north of Camden) and she died a short distance from here in Austerlitz, New York. Lorraine, Penny and I took a walk today through the woods to her gravesite, which is alone in the middle of the woods a few miles from her house “Steepletop”. Penny paused along the way to bark and things we couldn’t see, but which I would like to think could be the enduring energy shadows of Millay and her pals, frollicking in the woods. Oh, to be a part of those conversations!

For $15 bucks you can get a guided tour to her house and gardens. I was a bit “light” in the wallet, as Tony Soprano would say, so that had to wait for another day.

I don’t know why I search for connections. But it means something to me that Edna and I frequented the same space, albiet many years apart, since she died the year after I was born. If there are two places on earth that hold special meaning to me, it’s Camden, Maine, and Chatham, New York. I’m sure part of it is that both represent for me what LBJ called ‘a type of serenity’, which he found on the banks of Pedernales in Texas.

We railed against LBJ when I was at Brown, in the sixties, but now he looms as one of the most courageous of US Presidents, who had the incredible guts to take on the racism of the Old South, and who build — or tried to — ‘The Great Society’.

The man dreamed big. Those were the days, yeah?