It’s Not About the Bugs 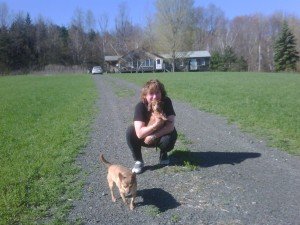 Every once and a while I will take a break from humanity and go up to my place in the Berkshires, in upstate New York, about 30 miles south of Albany. I have a cottage that sits on ten acres my mother bought about 40 years ago, when she was working as a school teacher on Long Island. She loved the country, and there wasn’t much of that on the cement glazed sand spit, much less in Levittown, where my three brothers and I grew up. It’s my ‘If it all goes to hell” place. There’s a small fish pond, a big field where the original owner used to graze his dairy cows, and my current neighbor runs her goats and horses when I’m not around, which is all right with me, except when her horses chew the bark off my peach tree, which is not.

The deer show up most days, usually in early morning or late afternoon, taking possession of the field until the buck decides it’s time to move on. This Sunday, while I was out getting the Times, Lorraine stepped out onto the deck and surprised a huge wild turkey in full display. Penny and Bruno (the one charging the camera, pictured above) chased it away.

By far the most interesting visitor was the rodent I found sleeping on the little deck outside the sliding door to the family room. I thought it was a dead mouse, at first, but when Lorraine started to kick it off the deck into the grass, it sprouted a pair of wings and opened its mouth, hissing at us, and revealing a pair of tiny, needlelike canines.

Assisted by another kick from Lorraine, the Count flapped off and lighted in a large blue spruce tree at the eastern edge of the field.

At this time of year, standing beside the pine trees, you can hear a soft clicking sound which is the cones drying out and the kernals coming unstuck. Yesterday, in late afternoon, I sat on the deck watching a red-tailed hawk and a crow locked in aerial combat. A woodpecker came off a dead walnut tree and, lighting on the roof, began drilling into the metal chimney. They do the same thing to my metal chimney cover back in Bethesda, and I always wondered about that, until it suddenly hit me: It’s not about the bugs. It’s never been about the bugs. They can’t get a sound nearly that loud by drilling into plain wood. They’re sending a message to the females of the species: “I’ve got a big one!“

It was around midnight that my son, John, called from Colorado to tell me: “Dad, Obama got Osama.”