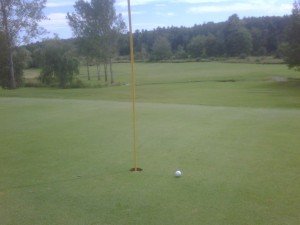 From 175 yards out - The Swing Doctor's Magic is real!

Thou comest, much wept for: such a breeze
Compell’d thy canvas, and my prayer
Was as the whisper of an air
To breathe thee over lonely seas.

I first met Bill Doherty in 1978 in the Domincian Republic, under circumstances he would rather forget. I was invited to a reception organized by Doherty’s American Institute for Free Labor Development (AIFLD), which had hired me to design a rice marketing scheme for a peasant farmer union affiliated to the Dominican Labor Confederation. Doherty had arrived by Lear Jet in the company of all the AFL-CIO bigwigs — including “The Plumber” himself, George Meany — to witness the electoral victory of Doherty’s handpicked candidate, Rafael Tejada. The problem was, as Bill discovered only upon landing, Doherty’s candidate was going to lose. His Country Director had screwed up, and lost touch with the rank-and-file. Tejada was a corrupt blow hard, good at making speeches but a zero when it came to delivering to his members, and they all hated him. They were going to elect instead someone more left-leaning, who would be an anathema to Doherty and the AFL-CIO. In short, a major embarrassment.

All this was explained to me as Joe Campos, the guy who hired me, led me through the crowd to introduce me to Doherty. “Oh, hi, yeah, good to meet you!” His hand struck at mine like a barrucada at a silver lure, and then the big Irish-American turned back to his reaming of his Country Director.

Doherty was one of the most colorful human beings I have ever known. He was not content to be a witness to history, he had to make it. I will never forget the excitement of being called to “the bridge” (his office) in the middle of the wars going on in Central America during the 80s. It was like being admitted to a secret room where the fates of nations were being decided. He taught me much of what I know about politics. In 1983, at the height of the war, he asked me to take over the El Salvador program. I told him my only reservation was that I had met a woman I was in love with, and I didn’t think she would quit her job just to follow me to El Salvador. Doherty, a staunch Catholic, had the answer: “We’re going to hire your girlfriend, but you have to marry her.”