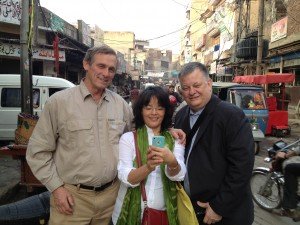 That’s what they say here, and after you’ve seen Lahore’s bazaar, you know it’s true. This city is a Microenterprise Mecca. Watching its inhabitants buzzing about their business you understand the meaning of the term ‘work ethic’. Yesterday, we met a young man, a cabinet maker coated with saw dust, who took some time out from producing headboards and end tables to describe his day for us. “I arrive at 7 a.m., and leave after midnight”. The product of his toil is sold in showrooms at four times what his customers pay him. His dream, naturally, is to one day have his own showroom.

As a colleague of mine once said about New Orleans: “If you can’t find it here, it’s because you either don’t want it or it doesn’t exist.”

So why is the penetration rate, by some estimates, as low as 5%?

Before the end of the week, I hope to solve this mystery.