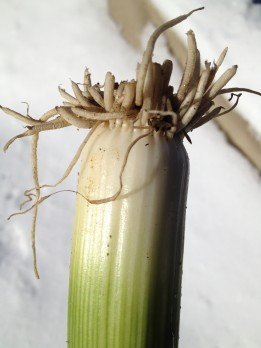 Dilbert’s hairdo modeled after the humble leek — who knew?

An old friend from Honduras I hadn’t heard from in over 20 years contacted me over the holidays. We talked about the old days when she helped me establish FINCA in Honduras with little more than an investment of $10,000 and a diagram of how a Village Bank worked. Today, FINCA Honduras is a small Finance Company with about 20,000 customers and $10 million in outstanding loans.

The first village bank we organized was in a little town called Siquatepeque, which is situated on the highway between the capital, Tegucigalpa, and San Pedro Sula, the principal town on the Atlantic Coast. Many of the people there make their living from ceramics. Mercedes Sofia, my friend, suggested it would be a good place for FINCA to establish its first Village Banking group as she had a contact there who told her about a group of women who needed credit to expand their businesses. We travelled there with a guy named Pablo who Mercedes Sofia had recommended as a possible director.

When we got to the town, we met with a group of about 30 women who made ceramics which they sold to a local man, Don Alfredo, who had a store on the side of the highway. Because they were always short of cash, they had to sell them “hot out of the kiln”, as it were, and at a really low price. I explained to them how the village bank worked: we would give each woman a $50 loan, and they would repay us, at 3% interest per month, over a period of four months. The weekly payments of principal and interest would come to about $3.50. In addition, they would have to save 20% of the loan, or $10, but that would be their money, held in the local village bank. They could save more if they wanted to. If they all paid their loans in full, and paid in the savings, then we would make them a second loan equal to the old loan plus we would match the amount they had saved. So if they saved the minimum ($10), we would lend them $60 for the second loan cycle.

They women enthusiastically agreed. But there was one further condition. They had to meet four times over the next four weeks, during which Pablo would train them in how to manage the credit, before we disbursed the loans. We wanted to see how serious they were.

Everything understood, we departed back to Tegucigalpa. The next morning, Pablo drove me to the airport. As he was seeing me off he said: “Listen, Rupert, I have to tell you something. There is no way I am going back to Siquatepeque. I am a city guy, not cut out for this kind of work. You will have to find someone else.”

I was crushed. My first village bank in Honduras was going to be a flop.

But as we so many other things in those first charmed years of FINCA’s existence, we lucked out. There was a Peace Corps volunteer living in Siquatepeque, and she got a hold of the Village Banking Manual I had left behind with the women, and she organized the first four meetings, and then sent word through Mercedes Sofia to tell me they were ready for their first loan. I had left Mercedes Sofia with the ten grand, which she then disbursed to the women through the Peace Corps volunteer.

It was four months before I could get back to Honduras and see how the loan had turned out. I met with the women, who were all beaming. They had all repaid the loans in full. Some had saved much more than the minimum of $10 dollars, and qualified for second loans as high as $100. “So what did you do with your first loans”? I asked. Their reply astonished me. “We bought groceries with it,” the President of the group responded. “You mean food?” I asked. “Then how did you repay the loans?” “Simple,” the President said. “Before FINCA, we had to sell every piece as soon as we produced it, to buy food, just to survive. But when we were able to buy a month supply of food, we didn’t have the same urgency, and we could produce a quantity of pots and dishes, and sell them at a much better price, because we weren’t so desperate for money.” She grinned. “Everyone in Siquatepeque is happier now, except Don Alfredo.”

“Rupert, I went to Siquatepeque a few months ago,” Mercedes Sofia told me at the end of our conversation over the holidays. “You would not believe how well those women are doing! They all have their own stores, out on the highway now! They are so well off you wouldn’t recognize them as the same ones you and I met with almost 30 years ago!”

Today, we have over a million clients in 22 countries on four continents. But it’s those first clients, the ones whose loyalty continues to this day, I will remember best.