Hi, my name is Daphney! 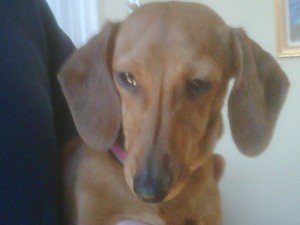 Does my nose look too big? No?

My mistress’ Dad had to go back to work today — poor Rupert! — so he asked me to author a guest websayito today on his behalf. I’m not much of a writer, to tell the truth, but — as you Yanks say –here goes nothin’!

I came over a few days ago from London, where I stay in a charming flat a stone’s throw from Hyde Park in London’s fashionable West End. Well, to be honest, we’re kind of on the fringes of fashionable, right alongside the railway tracks.

Let’s see, what should I talk about? Rupert, as he was leaving, mentioned something about a caucus race in a place called Iowa. And a tea party, like the Mad Hatter gave, or was it a reference to that thing in Boston? If so, come on, guys, that was back in 1773! Take about harbouring a grudge! (ooo, nice pun, maybe I’m getting the nack as we say)

But you blokes do have some real nutters over here, I must say. Well, ‘course we do as well, but we kind of keep them in the back rooms of the pubs, rather than strutting them out center stage like as you do here. I mean, wow, that woman from Alaska? I saw here on the tele ranting on about how the “government” had shipped all your jobs overseas and how the private sector should “reindustrialize” America, but without government interference. Helloooooooo! Who do you think shipped all those jobs overseas? It was the private sector, dummy, not the government!

Oh,and that Tea Party woman down in Florida, what’s-her-name. Regarding the EPA, she said that the government should stop putting “Nature ahead of people”. Yes, she really said that! Hellooooooooo! Like people are not part of nature? Next thing she’ll say is dogs are not part of nature, so we should stop putting them ahead of squirrels and rabbits.

Well, I think I’ve said enough for one day, don’t you? I think I will now take a well-deserved nap, maybe on one of the heating vents, if I can get a place on one before Penny and Bruno. Cheers!