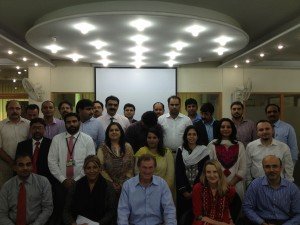 We kicked off the branding campaign for our bank in Lahore, Pakistan this week amidst great enthusiasm among the board and staff. The bank is performing well under the capable leadership of our CEO, Mudassar Aquil, and his team. While under no illusions about the challenges of operating a microfinance bank in Pakistan, we are optimistic about the future and our ability to improve the lives of thousands of Pakistani microentrepreneurs.

Meanwhile, elsewhere in this neck of the woods, it looks like its ‘game on’ in Syria. I imagine Obama is in that ‘uneasy lies the head that wears the crown’ mode these days. He lives in the shadow of the Iraq WMD fiasco. He probably remembers Bush at that press conference in Bagdad, who instead of receiving a bouquet of flowers from a grateful Iraqui girl had to dodge a pair of shoes flying at his head. But this time, the evidence seems incontrovertible, and the world can’t turn a blind eye while Assad tries to make gassing his people an acceptable means of crushing rebellion.

A good time for me to head to my next destination, the Democratic Republic of the Congo, where we will be celebrating both our 10th anniversary and a big milestone, as DRC joins Azerbaijan, Kyrgyzstan and Mexico in the “Platinum Tree” Club of FINCA subsidiaries that serve over 100,000 active borrowers.

Whew, it’s been a long journey, and a lot of work by many dedicated people. But what a blast!

People often ask me what motivates FINCA to work in some of the toughest, most difficult neighborhoods on earth. The answer is: the people need us. It’s easy enough to be dissuaded by the headlines that come out of these countries — civil wars, crime, political instability — but what you have to remember is the scary headlines don’t tell the story of the 99% of the population that just gets up every day, goes to work, and tries to make a living. FINCA serves the people that stay behind when the trouble starts. The people that will be there after the problems are over. The people that are rebuilding their societies, brick by brick. Hardworking people with good values who only want what we all want: a better life, with dignity, and a brighter future for their children.

We’ll be there for them as they strive for it. Building Tomorrow Together.