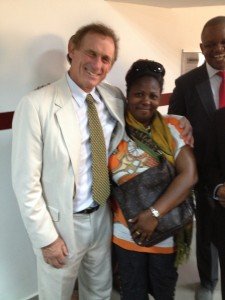 I showed up in Kinsasha last Thursday for the tenth anniversary celebration of our Bank in the Democratic Republic of the Congo, and found a program — and a city — transformed. While I was in Lumbumbashi (Congo mining town on the border with Zambia) two years ago, I hadn’t been to the capital city of Kinsasha since 2007, when our program was only four years old and just beginning to figure out the market. The city itself was still emerging from what has been called “Africa’s World War” which involved nine different countries allying with various factions struggling to control the Congo in the wake of the long Mobutu reign. Estimates of the number of people killed in the conflict vary from 3 to 5 million. There are signs that the Congo may finally be entering a period of peace and prosperity, even in the East where the worst of the violence has occurred.

A new highway runs from the airport to the inner city. Dozens of new hotels have sprung up all over the city, and new construction of housing and offices can be found everywhere. Where only six years ago our office building was alone on an empty block (and our employees hunkered down there during a firefight), today we are surrounded by stores and office buildings. Our Regional Director, ‘Big Mike’, introduced me to a longtime client who had braved the bullets to make her loan repayment on time.

FINCA DRC’s anniversary coincided with another important milestone: we surpassed 100,000 active borrowers, making us the largest bank (in terms of clients) in the country. We made this announcement at a Press Conference held at Flueve Congo hotel. I can confirm that DRC has a free press. Not a single softball question, but rather members of the Fourth Estate questioning our interest rates, group lending methodology and whether we truly practiced client protection (we do) as advertised.

As always, the most rewarding part of the visit was talking to our clients, which I did during a number of surprise visits to our branches. The woman pictured has been with us ten years and described how a series of FINCA loans had helped her build her hairdressing business, where she served an average of 20 clients per day. A male client had started with a loan of $40 dollars seven years ago and was now borrowing $1,750 to build inventory for a grocery store he owned. Big Mike expressed frustration at how crowded our offices were, and how some of our clients had to wait several hours to transact their business. I pointed out to him that most banks would be happy to have this problem. We are trying to improve the “client experience” in this regard by pioneering “Agent Banking” in the DRC, wherein we partner with small vendors of mobile phone top ups and money transfers, giving them POS machines so they can take deposits and disburse loans just as if they were FINCA tellers, but without the need to construct a $200,000 branch office. Like everything else in the Congo, this model is growing fast.

I said, jokingly, at the press conference that I had seen immense growth in the city since my last visit, and that my staff had claimed that most of this growth could be attributed to the presence of FINCA. No one laughed. As if they believed it.

It’s nice to have a joke fall flat, now and then.