Hangin’ at the OC, Yo 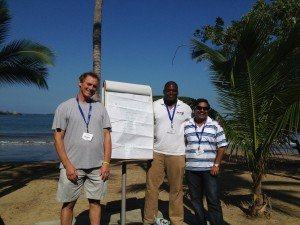 With Devi and Guy: no windowless conf room for this workshop!

Jonathan Lewis and Topher have done it again: another great Opportunity Collaboration uniting social entrepreneurs around the globe for a week of networking, Big Thoughts, and, oh yes, Tequila. Can’t forget the blue agave extract. No key notes, no power points, just a lot of good conversation with the people launching or running or funding some of the most promising social enterprises in the world. I go there to see with whom FINCA should be partnering in education, health, water & sanitation, green energy, or agriculture. Or sometimes I’m just offering advice to the up and coming SEs on how to avoid the myriad mistakes — and occasional right moves — I made on my own journey.

I caught up with Boris Bulayev whose SE Educate! has grown from its dorm room days in Amhearst into a thriving organization that empowers Uganda’s youth to actively solve public problems. Educate!’s flagship program is a two-year high school curriculum that is currently being taught to 1,000 students in 24 schools. Boris has big plans to scale it next year. I met for the first time Silviano Valdez who, while still in university, launched Vuwa Enterprise which is selling rainwater catchment systems in Kenya that provide families with clean drinking water for just a few hundred dollars. I talked with Prakash Tyagi, a medical doctor from India who’s clinic is the only medical facility for a 100,000 people in a drought-prone state of India where the people eke out a living with animal husbandry and millet cultivation. I learned about breakthroughs in more efficient stoves, including a solar-powered one being produced by a company called One Earth in China. The overall impression is that the problems of design, affordable pricing and distribution are being solved, one by one. Some of the best young minds in engineering, economics, and finance are working hard to improve the everyday lives of poor people the world over. FINCA can help by financing both sides of the distribution.

Life is slower in Mexico, but I finally realized its nothing to do with the culture, but rather to appreciate a country as beautiful as Mexico, perforce, you need to slow down.