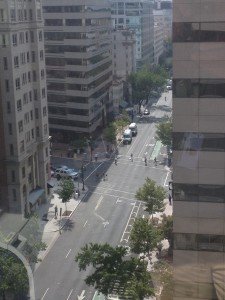 Congress went on vacation last week, and overnight Washington D.C. emptied out. At the same time, the “Heat Dome” which had been squatting overhead like an Alien Mothership for the past two weeks miraculously dissipated.

I think not. Meanwhile, rumor has it that future Heat Domes, like hurricanes, are going to bear the names of humans, in this case, of Global Warming Deniers. This first one, for example, was unanimously denominated “Heat Dome Limbaugh”.

Returning to the subject of The World’s Greatest Deliberative Body, you could almost sense the relief settling in over the nation, as we realized that, at least for the next several weeks, no new dangerous decisions — or lack thereof — would be coming out of Washington. Of course, our reprieve will be short-lived. Apparently just three weeks after they return we will be face another government shutdown, followed shortly by another Debt Ceiling standoff.

Which gives me an idea: why don’t we send Congress on a year long sabattical? Surely, Obama could keep the wheels on in their absence. Because if Congress were a T.V. show (Wait, Fox, no! Don’t even THINK about it!), they would have been cancelled due to low ratings five years ago. The odd thing is, of course, most of us really like our local representatives and Senators. It’s just the ones the other states elect that we can’t stand. In my case, for example, I have a real problem with Ted Cruz. While I love Texans as people, if Ted and I were on a Venn Diagram, several solar systems would prevent us from intersecting.

It’s actually the first time I have ever found myself in Washington during the first weeks of August. The commute is a breeze. Plenty of time for light reading, like Forensic Internal Audit reports. Going to tuck into one right now, as a matter of fact.