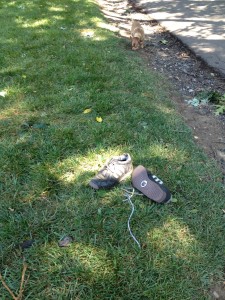 A little anti fungi powder and good as new

We had something of a Meteorological Nine Eleven here in the Nation’s Capital last night, a storm of such intensity it wrenched gigantic trees up by the roots, blocking roads and, of course, cutting off power to 2 million of us. Which explains why I am here at our office, downtown, escaping the 110 degree heat in my powerless house.

But the most eloquent testimony to the strength of last night’s storm was that it brought down, after 15 years, Gabriel Young’s shoes. They had been thrown up into the branches of a large oak tree across the street from our house by my son, John, who had persuaded his young friend, Gabe, to tie the laces together “so he could hang them over his shoulder.”

Well, Gabe fell for the ancient trick, and soon his shoes were dangling from a branch 20 feet above him, out of reach for the next 15 years. Until last night’s storm brought them back to earth.

To better understand the cause of such awesome, terrifying climactic phenonmena, and to get some insight as to what we might do about it, I called up Dr. Rush Limbaugh, renowned commentator and expert in the Meteorological Sciences. He was in a bad temper, coming off the failure of one of his heros, Justice Roberts, to strike down Obamacare.

“Not now, Rupert, I’m just heading out to have lunch with Boehner to see if there is anything we can still do to prevent 50 million Americans from getting healthcare insurance.”

I agreed that would be a disaster of epic proportions, but begged him to share with me his view on the increasingly erratic global weather patterns, which have been causing floods, droughts, and violent storms of ever greater intensity. Not to mention the rising sea levels.

“I think we can rule out human activity as a cause,” Rush declared.

Why is that, I wanted to know?

“Because if it were human activity, then we might have to do something about it. And that would cost money. And that would mean raising taxes. You see where I’m going with this?”

I did. But I asked if there were anything we here in Washington could do about it, so we wouldn’t have to face weeks without power every year.

“My advice would be to cut down every tree in Washington,” Rush counseled. “No trees, no fallen power lines.”

I agreed it was a brilliant solution. And if we’d done that 15 years ago, Gabe would never have had to do without his sneakers for all these years.