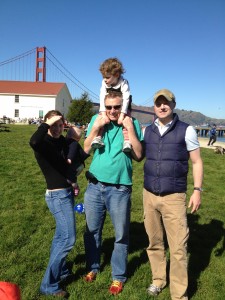 Down by the San Francisco Bay

My older daughter turned 35 yesterday, and, in the overall spirit of disbelief that accompanies such milestones, we were talking about the day she was born, and how mine was the first face she saw upon her arrival, her mother having been sedated after a noble attempt at “natural childbirth” which was fashionable at the time (Lamaze, I think we called it). Julie had not known this, and she was pleased to hear it, especially since the day after she was born I decamped from Madison, Wisconsin for a 6 week consulting gig in the Dominican Republic. I had always dragged that guilt with me, like Marley’s ledgers, unhelped by the knowledge that accepting that assignment, despite the deplorable timing, set me on a path from which I have never strayed. My client was the American Institute for Free Labor Development (AIFLD), who subsequently offered me a permanent position at their HQ in Washington. My tenure there amounted to a Ph.D. in international politics and Human Resource Management where the humans in question were some of the craftiest operators on the planet. They taught me how to read the hidden agendas of friend and foe alike and, most valuable, defend myself from having the floor sawed out from beneath me.

The moment came, in 1983, when I had to make an agonizing decision: go to El Salvador to take over AIFLD’s program there, and complete my slain boss and mentor’s mission of finishing the implementation of the Land Reform, or stay home with my daughter. I elected to go to El Salvador. While, from the perspective of my life’s work, it was the right decision, I underestimated the impact this act of abandonment would have on my first born. It took me years to undo the damage and repair the trust.

Today, Julie has a daughter and son of her own. I can already see she will do a better job of parenting than I did. And last night she said the words that every parent lives for: “This is the happiest I’ve ever been in my life.”