The First Time I Saw Kiev 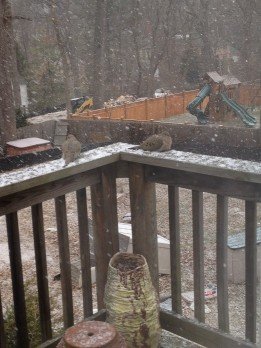 A pair of doves appear outside my window. Peace in Ukraine?
I went to Kiev for the first time in 1992, only a year after Ukraine became independent of the Soviet Union. I was invited by a member of a Rotary Club from Seattle, Washington, a Ukrainian-born American who knew of our work in Latin America and thought FINCA could play a role in moving the country off the command-and-control model and towards a market-based economy. In the end, we never established a program there (long story), but I will always remember my impressions of what turned out to be my first visit behind the (now fallen) “iron curtain”.

I made the trip in the dead of winter, January or February, I think. Part of our Western propaganda was that all Soviet women were fearsome apparatchiks , but when we disembarked from the plane we were met by what I still think of as probably The Most Beautiful Woman in the World, a stunning blonde in a mink coat and hat who cheerfully escorted us to the baggage claim. Outside immigration, I was met by my Rotarian contact, Konstantine, and my interpreter, Nataliya, another stunning Ukrainian woman. There were no tourist class hotels in Kiev at the time, so they put me on a cruise ship docked on the Dnieper River. The room was minute, the food bland, but the crew friendly. I thought it was also deader than tomb at night, but this proved not to be the case.

The next day, Konstantine took me on a tour of Kiev, and then to a meeting of the Kiev Rotary Club in one of the many drab buildings that had housed the Soviet bureaucracy and grew like urban blight around the beautiful Ukrainian Orthodox Churches in the center of the city. There was a huge in the room, and the Rotarians were so immersed in their own bilateral conversations the brief speech I had prepared at Konstantine’s urging went entirely unnoticed. Afterwards, I asked my guide to introduce me to people who already had a small business or were trying to start one and might need credit. The economy of the Ukraine was in terrible shape, like that of the rest of the former Soviet republics. Unemployment was high as the government agencies laid people off and State-run enterprises shut down altogether. Many former professionals — doctors, scientists, lawyers, etc. — had established kiosks and were selling cigarettes, vodka and canned goods. The markets were actually pretty active, with people selling fruits and vegetables from the small plots there were permitted to cultivate. One small farmer greeted me enthusiastically, asking me to send his best wishes to Bill Clinton. What Kiev lacked completely at that time were retailers of any size or with any inventory other than garments left over from the Soviet era. My guide seemed embarrassed to have to show me this. “What a bunch of junk!” she exclaimed, picking through a rack of drab-looking dresses. “Who would want to buy this rubbish?”

That night, I went poking about the small cruise ship, in search of a way to pass the time. For a while, I stood on the bow, watching the black waters of the Dnieper rushing by, carrying large chunks of ice. So far, my impression of Kiev was that it was a pretty gloomy place, populated by people who seemed not to have got the news that their Soviet masters were no longer in charge. On my way back to my room, I saw a door with a cocktail glass on it, and pushed it open. Music exploded out into the cold Kiev night. Before my eyes, about fifty people, men in jackets and ties and women in evening dresses, were staggering about a dance floor, all in advances stages of inebriation. So this was where the party was! It changed my view of Kiev and Ukrainians completely. In fact, as I went to other former Soviet satellites over the ensuring years — Hungary, the Central Asian Republics — I found this to be a common theme: the secret, inner life of the cities and towns. Beneath the ugly, outer skin of the Soviet infrastructure was a vibrant core where people exercised their love of music, dancing, and life itself.

Today, Ukraine is one of a number of countries, struggling to shape its new destiny. Syria, Egypt, and Libya are others where opposing groups are rushing to fill the vacuum left by fallen despots. A decade from now, will they have found a way to live together in more tolerant, pluralistic societies? It seems a question no amount of well-intentioned — or not – intervention by outsiders can answer.