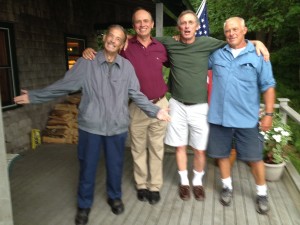 My time in Camden is always ‘televisionless’, so I thought I would catch up this past weekend and sit, potatolike, in front of a few shows I followed last season. One of them was ‘Episodes’, a delightful premise in which two award-winning Brit screenwriters move from London to Hollywood where, predictably, their clever writing gets turned into mush by the Tinsel Town Studio Execs.

In a scary case of life-imitating-fiction-imitating-life-etc-etc, the new season of ‘Episodes’ suffers that identical fate. It totally sucks. The writing is beyond atrocious, as if they fired the previous screenwriting team and farmed it out to Shakespeare’s roomful of monkeys with laptops. There is not a single funny line. In what they must have thought was extremely clever, they built the first episode around minor characters, who in future episodes will send the main characters from the first season into pouting fits because they are no longer the ‘stars’ of the show. Get it?

What happened to ‘Episodes’ is all too common in Hollywood, which I’m told by my daughter, Michelle, who works in this field, is probably the result of asking ‘focus groups’ of viewers what they liked and didn’t like about the first series. As in ‘I’d like to see more of so-and-so’. A good strategy for selling products like ice cream and Presidential candidates, perhaps, but it somehow leeches the magic out of television shows.

In what may have been a deliberately cruel move by some cynical ‘Showtime’ programmer, they ran ‘Reality Bites’ earlier in the day, which is about a young documentarian (Winona Ryder) whose promising work gets destroyed by a Studio Exec (Ben Stiller). It didn’t help ‘Episodes’ that the writing and acting in RB was across the board brilliant.

Anyway, it’s back to work today, and a mountainous in box.