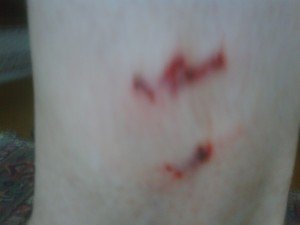 As I have recorded earlier in this space, Bruno, my dog, objects to my leaving the house. Usually this protest takes the form of racing towards me with the muzzle velocity of Glock round, after which I whirl and shout at him, and he pulls up just short of my ankles. Often Penny, the mini daschund, acts as my wing man (or woman), biting Bruno on the back of his neck until he desists.

Oh, and all the while, Sweet Lorraine is shouting over the hubub “Stop, you’re scaring him!”

Lorraine insists that if I just do nothing, that Bruno will break off his attack and allow me to exit our home peacefully. So, today I thought, ‘Why not?’ Let’s give it a shot’.

The picture above is the result. The little bugger bit me! I mean, REALLY bit me! That’s not strawberry jam, that’s my hemoglobin!

Still, Lorraine insisted, even this time, that I had brought this upon myself. Prudently — after 28 years of marriage I have learned to think before I speak — I said nothing, but I did take it up with Bruno to get his take on the whole incident.

“Bruno, was this my fault?”

“We don’t have a tax problem, we have a spending problem.”

“We don’t have a tax problem, we have a spending problem.”

Then I realized I had left the radio on yesterday morning, tuned to WMAL 630. It reminded me of the time I was listening to Rush and an hysterical woman came on asking him “I don’t understand, Rush, why do they (Liberals) hate America?”

So, now, in the wake of the loss of our National Debt Rating, it’s my turn: Rush Limbaugh, why do you hate America?