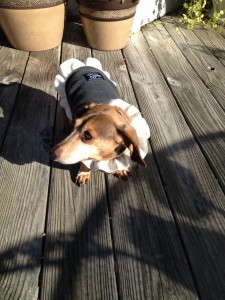 Difficult to shop for, has everything already

On my walk this morning I heard a bizarre clucking sound coming from one of my neighbor’s front yards. Is he raising chickens? I wondered. And then I saw the source: a huge Pileated woodpecker, sitting on a bird bath, clucking away.

I’ve been holding off weighing in on the Sandy Hook Massacre, just listening to other people and their ideas on what should be done to end the runaway insanity of our (lack of) gun policy. One friend had an interesting thought: “The Second Amendment was for a different time (1791, to be precise). America is different now, and we need to update the 2nd amendment.”

What he meant was, in the 18th century, America was still a new, vulnerable nation, with a weak army, and it had to rely on its citizens to defend it from enemies foreign and domestic. It made sense back then for every citizen to pack a musket. Muskets weren’t quite as efficient as Bushmasters. Whereas a trusty musket could kill one person every minute, a Bushmaster can murder 950 during the same timeframe. But the real difference is that, while the musket was used by citizen-soldiers to defend the country, only a handful of the 300 million guns in the hands of our citizens today have EVER been used to fend off an assailant, and NEVER to fend off a foreign invader. Rather, in the vast majority of cases the weapon was aimed at a policman, an innocent civilian, or, in the last horiffic case, a classroom of 6 year olds.

So if we were to legislate sanity back into our attitude towards guns, where would we begin? I’m sorry, but I’m not impressed with Wayne LaPierre’s, the Grand Wizard of the NRA, proposal that we put armed cops in every school in America. So, fine, then the killing fields shift to malls, theatres, churches, offices, golf courses, swimming pools, playgrounds, etc etc. So what, we put armed cops in all of those places? That’s a lot of cops, Wayne. How much do you think your taxes would go up to pay for that?

So what, then? Obviously, it would be entirely impractical to ask or coerce all gun owners to turn in or confiscate their stocks. But we could start with the ammo. We could immediately prohibit the sale of assault rifle ammo. Eventually — one hopes — the owners of assault rifles would blast through their existing stocks and those murderous weapons would fall silent, except for on foreign battlefields.

Next, borrowing a page from the tobacco industry, we could attach labels to all the weapons that have been used to gun down innocents. As in: “Congratulations on your purchase of a Glock 17 with a 33 round magazine. To date, this weapon has killed over 55,000 innocent Americans, 25% of them below the age of 10. Enjoy it and please keep it in a safe place!”

Finally, we could pass a law that puts you in jail if your weapon is used in a murder. The gun shops would actually like this because think of all the biometric gun racks they could sell!

Basta. Enough is enough. Let’s have a referendum on a new Second Amendment. I’d be happy to start work on a draft.