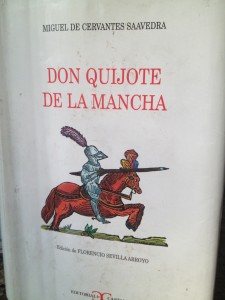 I had no sooner turned the final, 1319th page of Don Quixote, completing my year and half long literary journey, when I heard a clarion sound out on the deck. Going out to investigate, I came upon a dozen High Priests of Culture, decked out in purple robes and mortarboards. One of them, whose robes were criss crossed with gold braid chains an inch thick, produced a sword, commanding me to kneel.

“Rupert Scofield,having completed in good faith and in the original Castellano, the unabridged, un Cliff’s Notes version of Don Quixote, I now, by the power vested in me, pronounce you a Man of Culture. Rise, Mister Rupert!”

“Just Mister? After all that?”

“Now that’s more like it! So, exactly what privileges does this new status confer upon me? Do I get to drive an Aston Martin Vanquish? Hang out with Oxford Dons and the Dali Lama?”

“No, but you can be an Intellectual Snob now. You can hang out in bookstores in a tweed jacket with suede elbow pads and smoke a pipe.”

But just as I was putting my signature on the sheepskin, one of the prelates cried foul.

“It says on the book jacket that you can’t consider yourself cultured unless you’ve read Don Quixote. But it doesn’t that’s the ONLY sine qua non.”

He tried to hand me a boxed set of Recherche du Temps Perdu, by Marcel Proust. I stayed his hand with my own.

“Thanks. I think I will retain my ignoramus status.”

So should I tell you how it ended? Why not. You know you’ll never read it. It was actually kind of sad. Don Quixote died. But not only that, he died sane, renouncing his locura on his deathbed. The footnote said it was Cervantes’ way of ensuring that there would be no further bogus sequels.

And to this day, there haven’t been.

Wait a minute. Get me my agent!