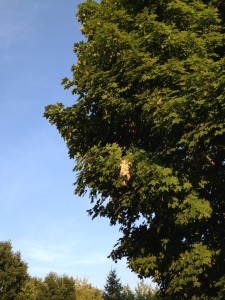 Of all the Maple Trees in Upstate New York, You had to Walk into Mine

I’m here in Chatham, upstate New York, seeking respite from the final days of the Second Hottest Summer on Record in D.C. At night the temperature here drops to 50 degrees. I’m not on vacation but since I can pretty much work from anywhere in the world — and do — why not do so from the deck of my 10-acre spread in Berkshires?

The first day, I swear I saw (or he saw me) a wolf down at the small pond we have at the southern edge of the property. Maybe it was a coyote, but it was awfully big for one, and rumor has it the wolves have heard there is a ban on shooting them down here and so they are moving back down south from Canada. Imagine the day when there is a ban on shooting people in theatres, or workplaces or…!

Okay, I’ll stop. On the micro-predator front, a colony of wasps has built an impressive looking condo in the maple tree above my deck. One of my earliest childhood memories is of my older brother, Frank, trying to knock down a wasp nest in our tool shed with a rake. Despite the fact that he used to hold me by my feet and pound my head on the floor, I took no pleasure watching the stream of wasps chasing him like MIGs and stinging him all over his head. To this day I would rather face a charging Rhino than have a bee, wasp or hornet in the vicinity.

My general policy viz the animal kingdom is “Live and Let Live”. But the prospect of an errant frizbie or wiffle ball knocking down a nest of that size makes me feel an amendment to that charter may be called for. To be sure I wasn’t being too paranoid, I looked it up on Google, who had this to say:

“Removing a wasp nest, should be handled by a trained professional. It’s a no-brainer when you think that each wasp can contain as many as ten thousand angry wasps.

If you try and remove the nest yourself, you only need to anger one wasp and the whole clan will come looking for you. This is because a wasp emits a ‘help me’ pheromone when they feel threatened and this attracts all their stinging colonie mates.”

Sadly, this advice came 50 years too late for brother Frank. But I am not going to make the same mistake so I have a call into someone named Victor who is “Chatham’s Premier Wasp Man”, according to my real estate agent, Ruth.

Enough of wasps, now to politics. Mitt told a joke! He said no one had asked to see his birth certificate! Hahahahahahahahaha, that’s funny, Mitt!

Actually, it is kind of funny. And I want to believe it was spontaneous — had to be, right, come on, never would have cleared the handlers. So good, Mitt has a sense of humor, he’s not made of wood, he’s not a robot. But it’s not his birth certificate we want to see, is it, Mitt? It’s your tax returns!

And here I may part company with my Liberal colleagues. I actually don’t care to plow through the Byzantine 1040 of someone whose one year dividends surpass my lifetime earnings — too depressing! What I do want to know, however, is how in the world he has an IRA worth $100 million? When the MOST we are allowed to stow away each year is $30,000? He would have to be 3,000 years old, for Christ sake!

Wait a minute….. Maybe Jon Stewart is right. He is one of The Living Dead. But even if not, come on, Mitt, tell us how you did it! What kind of investment yields that kind of dough! Share it, and you have my vote.