Catching Up With Chris Bould 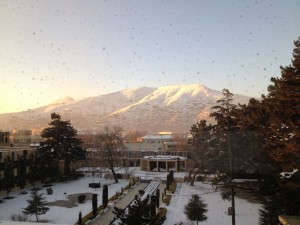 First There is No Mountain, Then There Is

Was awakened at 5:30 by the call to prayers, so may as well catch up on my websayito.

I spent a delightful evening last week with Bafta award-winning director Chris Bould, talking about writing, the state of the film industry, and a student film he and my daughter are working on here at Metfilm Studios in London. As we talked, it struck me how alike directing and managing are. They both involve getting the best possible performance out of talented people. You could think of running a company in this modern age as directing a prolonged, multi-season TV show, in which there are no breaks between episodes, but with ample opportunity for improvising on the set.

The evening was filled with great stories (Among other things, Chris did a documentary with Liz Taylor, and in the process interviewed many who worked with her, like Rod Steiger), and the lessons they held for people who strive to lead (“direct”) other people. One thing we both agreed on was the need to invest a great deal of time and energy working with the ‘weak links’ on the team. Take the case of Ernest Shackleton, an Antarctic explorer at the turn of the century whose ship became trapped in pack ice and was slowly crushed and sunk. Shackleton managed the save his entire crew, leading them to safety a long over-ice journey. Part of his challenge in doing this was to manage the malcontents who had no confidence in him. To neutralize their opposition, he spent his nights in their tents, persuading them that he knew what he was doing and maintaining their morale.

In all organizations there are skeptics who don’t fully buy into the strategy and perhaps secretly hope it will fail so they can be proven right. (And, of course, sometimes the skeptics are right) Spend time with them. Even if you don’t fully win them over, at least you will send them a clear message: You opinion counts, and I value it.

Today is a travel day. Next stop, Lahore, Pakistan.