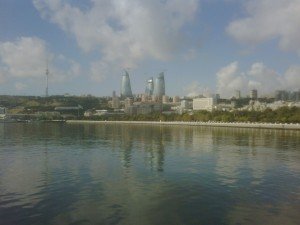 When FINCA first came to Azerbaijan in the late 90s, it was a poor country with more than half of the country living in poverty. Leaving the airport, which looked like a dilapidated potato warehouse, one took a grim drive through a classic post Soviet landscape bereft of commerce and littered with high rise apartment buildings of the studied ugliness that Russian architects were going for in those days.

Thirteen years and a zillion barrels of oil later, everything has changed. Poverty is below 10%, the economy has grown by 300% in the past seven years, and buildings like those shown above — looking like an augur piloted by blind mole creatures from the earth’s core — testify to Azerbaijan’s transformative wealth.

Which is, of course, very unevenly distributed. But who are we — with America’s middle class in free fall, even as the wealthiest one percent’s net worth skyrockets, as if propelled upwards by the weight of the Newly Poor crashing down on the other side of the teeter totter — to cast stones?

What a contrast to Afghanistan. What a little oil can do.