As Time Goes By (On Winged Heels of Mercury) 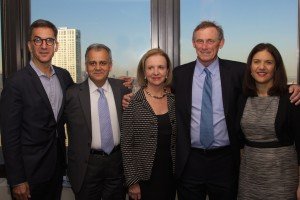 What does it say about someone that he hasn’t made time for Social Media in almost two weeks? Get with it, ‘mon! Times be passin’ you by!

I’m doing the Tiger Grandpaw thing out here in the San Francisco Bay (update to come), which has provided a powerful reminder of Temps Perdu when, as a parent myself, I fully appreciated the Energy Differential between grownups and those just starting out of the gate. They don’t stop! They don’t take naps!

Many thanks to the Microfinance Club of New York for hosting five (Asad Makmoud of Deutchebank is an Honorary Member) members of the Microfinance CEOs Working Group, and giving us the opportunity to describe how we came to be (ably recounted by Mary Ellen, CEO of Women’s World Banking), what we have been up to during the past two years (Tu Servidor, FINCA), our initiative in Mexico (Rosario, ProMujer), and our vision for the future of the MCWG (Michael, ACCION). It was great to receive some feedback from The Faithful as to the progress we have made towards our principle goal: advancing the cause of Responsible, Client-Centered Microfinance. If I read the crowd accurately, I think everyone was pleasantly surprised at how this disparate group of let’s call them former-competitors-turned-collaborators has mobilized behind a number of industry initiatives that will improve practices around client protection, transparency, and social performance.

More on that later. I can hear one of my Grandcubs crying for his bottle.