As the Year Winds Down 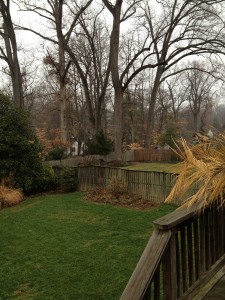 A Day Only a Squirrel Could Love

I fancy a gloomy, gray day occasionally, especially with winter coming on. The slate colored skies seem to press down on us, forcing introspection. On such a day I have the roads to myself, usually, except for the occasional car with a Christmas tree lashed to the roof. Lived I in a “Red State” there would be a bleeding deer carcass in Tannenbaum’s place.

It was in such a mood that I went to Berlin last week to participate in KFW’s conference on Financial Sector Development Symposium 2012. For one take on this read David Roodman’s excellent blog, where he refers to me as “always interesting” and “who probably has been involved with loans to the poor longer than anyone else there.”

Can it be? I’ll take the first, but, seriously, have I gone from being the young, brash, outspoken, opinionated neophyte to the oldest person in the room? Don’t answer that.

The narrative arc at the symposium was that the microfinance industry, while able to credit for the inclusion of over 200 million poor people into the financial sector, has yet to muster an effective response to the allegations of some academics, journalists and regulators that it hasn’t been a factor in propelling the poor out of poverty, and may even worsen the plight of the poor through over-indebting them.

Pracitioners and investors in microfinance have responded to this in different ways. Some, like Procredit, have exited the space altogether and rebranded themselves as Small and Medium Enterprise (SME) lenders. Others have “dumbed down” their messaging, saying that they never really claimed an impact on poverty, only one of financial inclusion. We at FINCA are investing more heavily in social impact measurement, in part to answer the “poverty impact skeptics”, but more importantly to learn more about our clients goals and aspirations so we may become more responsive to them, constantly improving our product offer.

Come, grow old with me. The best is yet to come.